Dano said:
The last couple of days were spent fabricating and installing the trim for the C pillars and the rear parcel shelf. This was followed by applying felt trim into the boot area.

The C pillar trims had to be made first, as the bottom edge of the vinyl is glued to the metal frame of the parcel shelf.

New pillar panels were traced onto and cut out of 2mm ply. To obtain the correct curvature, the ply was soak in water to make it more flexible, then it was clamped into place and allowed to dry in situ, thus allowing them to form the correct shape. 9mm foam was used as the cushioning.

The vinyl for the rear parcel shelf is attached to a stiff fibrous 3mm cardboard panel. This was done in two sections. The flat shelf piece and the rear curved section that follows the rear curve of the shelf and the convex curve of the rear windscreen. Paper patterns were made for each section, then traced onto the cardboard. The shapes were tapped together with cloth tape on both sides. The vinyl was attached as one-piece using 3M, 77 adhesives.

The 3mm felt boot trim was a little more difficult. This was due to the various curved surfaces and levels of the rear-axle housing. As with the parcel shelf, various patterns were drafted. These were mainly done with paper and masking tape. The paper was moulded as best as possible, then masking tape was used to finish the shape. The profile was outlined with a pen and then the paper and tape were carefully removed. The pattern was laid on the bench, with the sticky side of the tape up. More tape was applied over the original tape to give it strength and to prevent the tape getting stuck to other objects. The excess tape was trimmed along the pen lines. After tracing onto the felt, the pieces were cut and trial fitted. When gluing the panels into position, pieces of PVC conduit etc, were clamped into the curved strengthening profiles to achieve the same profile within the felt.

Although, it was not fitted originally, I attached a piece of felt to the underside of the boot lid. This to help prevent the lid from being dented outwards, when closed on objects within the boot. My ’70 had many.

The paper pattern layout is for the floor carpet.

The tracing and taping technique, was something I picked up from the web, when re-covering the seat on my son’s ’74 Iron Head Harley.
Click to expand...

Marty,
I couldn't have done a lot of it without your help. Between the three cars, we have solved many a problem together.

It’s taken a while, but finally sorted out the dimming of the LED dash lights and the indicator dash light not working.

Initially, I was playing around with resistors and diodes etc, but that became problematic. I eventually got the concept to work in parallel, but it was a nightmare and a potential electrical issue just waiting to flare. Taking advice from more learned people, both on this forum and other sources, the Pulse Wave Modulation (PWM) approach was utilised.

The first issue was finding a unit that could incorporate the original dimmer knob and more importantly fit neatly onto the existing circuit board. Most would dim the lights, but not meet the requirements as mentioned before. They ranged wildly in price as well. Eventually found a compact and cheapish one on EBay

A fair bit of dicking around was required to make it fit and work.

The original rheostat stem was cut and shortened to leave the stick out of the control knob to match the original look. Attaching the stem to the PWM unit was relatively simple. The PWM control stem had a slot in it, so a corresponding slot was made in the end of the original stem. A small piece of 1.6mm aluminium was used align the parts. The aluminium was held into position by two small pins.

The next issue was how to mount the PWM unit to the cluster PCB board. The stem on the PWM was only 6mm in diameter and the mounting hole from the original unit was 12mm.

A piece of round 20mm PVC was machine, drilled and threaded internally to hold, centre and stabilise the unit.

All up it is a neat fit and works well.


The indicator, dash warning LED was not illuminating, but all four external indicators were working. This was because when the lights (LEDs) were installed, load resistors similar to the ones in image below, were used to compensate for the lower current draw of the LED’s 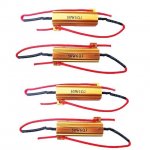 Instead of installing a load resistor somewhere under the dash, connected to the wire going to the indicator warning LED, it was easier to remove the original mechanical flasher relay and install an electronic version. Much neater. Yes, it may not be original, but the lights are brighter, use less current and in my opinion safer all round.


Once the lights were sorted, the dash pad was installed, followed by the steering wheel and associated bits and pieces.

The fascia for the heater controls etc. is still a work in progress. Just working out how to paint it and maintain the original look…

All up, I’m happy with the end results. 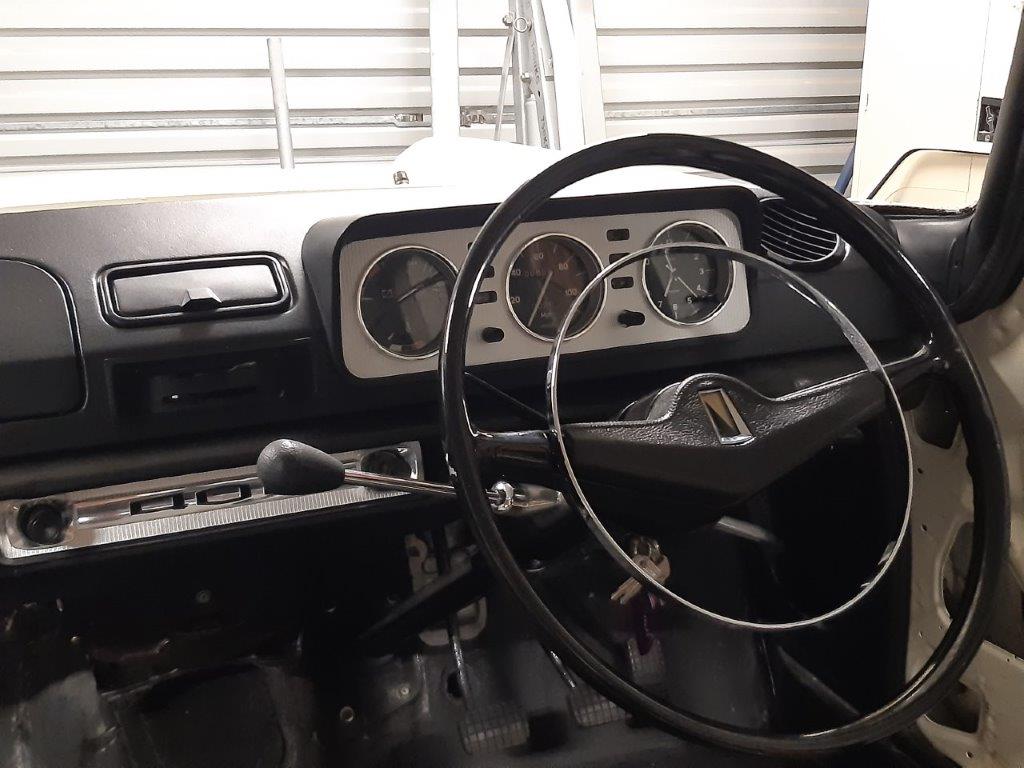 As you said Dano, a lot of dicking around but a great result. In particular, the plastic "404" panel which is intact (no hole for a radio) and still has a good finish, really sets it all off.
Last edited: Oct 21, 2020

Had the wheels balanced today and fitted them to the car. 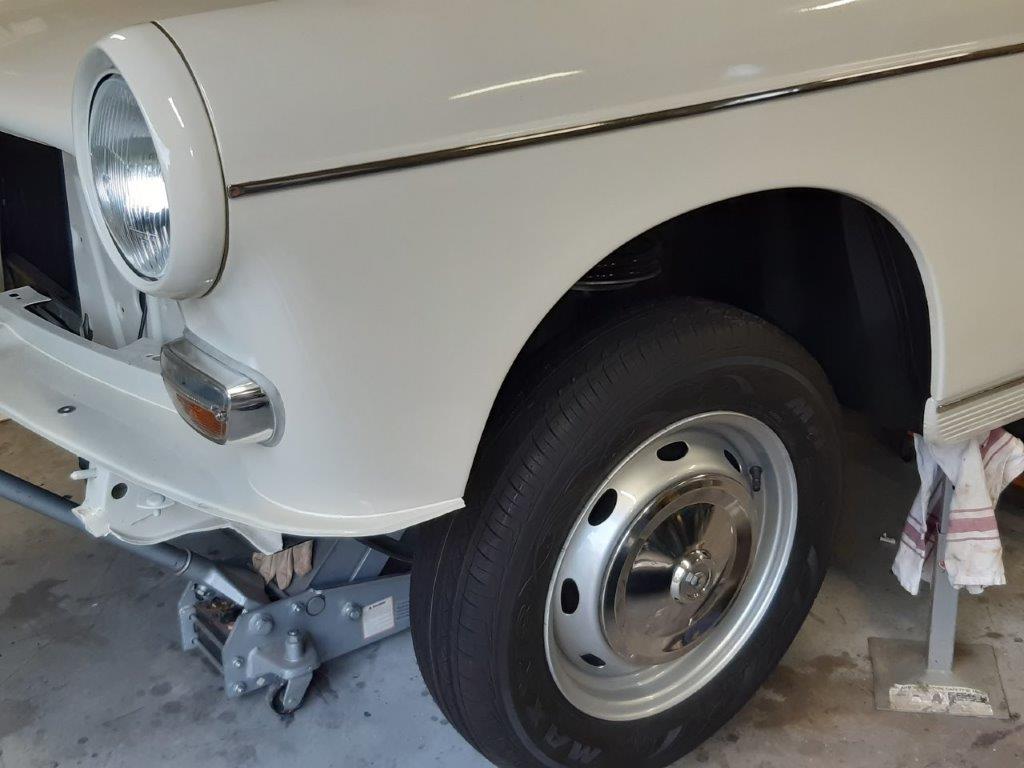 The tyre outlet was great, the owner offered to use glue on weights and not the old-style hammer/clip on versions. They glued the weights to the centre of the rims on the inside. He said, “it would be a shame to scratch the rims, since they looked as though they had just been repainted.” 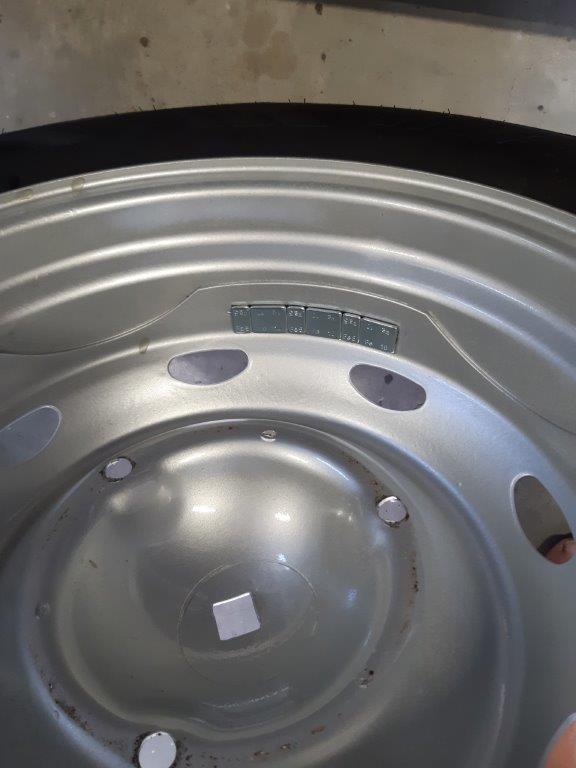 Dark marks between stud holes is dirt from storage.

The hubcap cage nuts, hubcap retaining bolts and 2 of the hubcaps were all NOS. Still have to select and polish two more hubcaps. 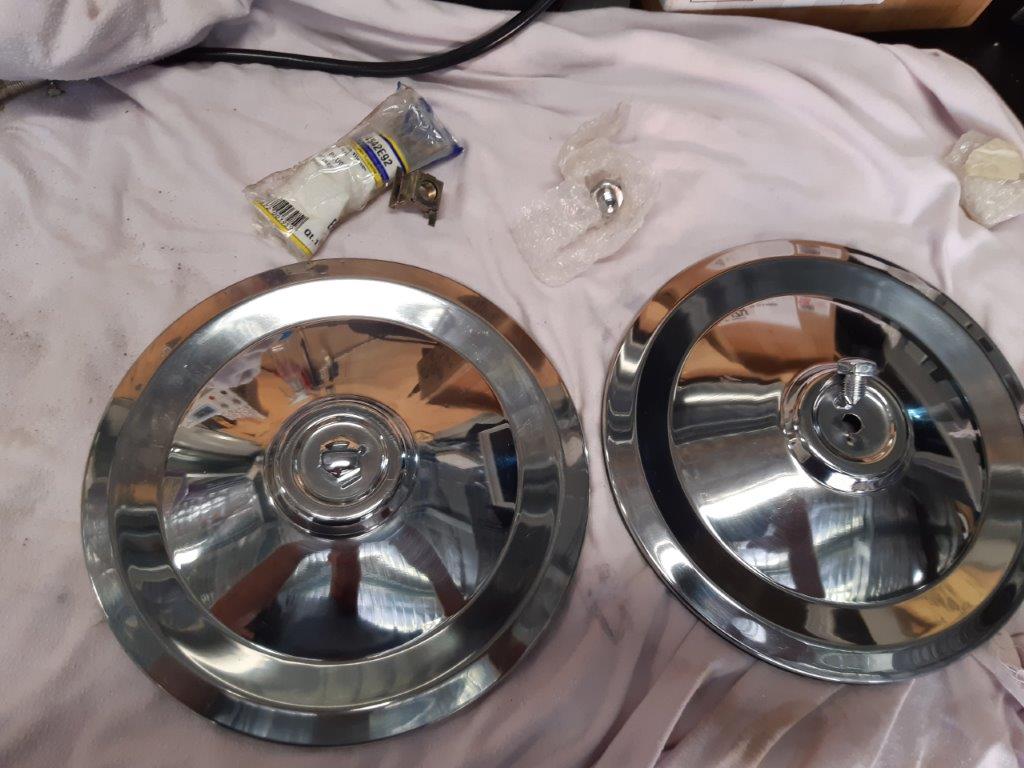 It is getting very close to being finished

Full marks to the tyre fitter for using glue on weights. How long do you reckon it's finished?

Peter,
I’ve set many time frames before and never met one.

This is what’s left.
Polish and fit,

You're likely going to get there before I do, though I will be close behind.

I just reinsured the car, this time for $80K CAD with Hagerty, so I had better get on with it!

Hey Dan, you've been neglecting the fan base as of late. How's the 404 coming along..?

+1 - I am slow too but may be catching up and finishing sooner!


Mike, I didn't realise there was a race. On my calculations, I am still ahead by 11 years. Unlike Graham, who knocked his out in the blink of an eye. Haha!

Yeah, things have been moving slowly. Unfortunately, I've had heaps going on in the background that are out of my control... Enough of the excuses.

Been tinkering with all sorts of small (suppose to be) jobs. Have I mentioned, I hate polishing stainless steel? Out of shear frustration, it has been put aside for a while. To add to the agony, the roof channel trims, need to be removed and repaired. Unfortunately, not enough care was taken when fitting ...

All the interior carpets have been cut, sewn and installed, that includes the ones that run along the inside of the doors and into the floor wells. 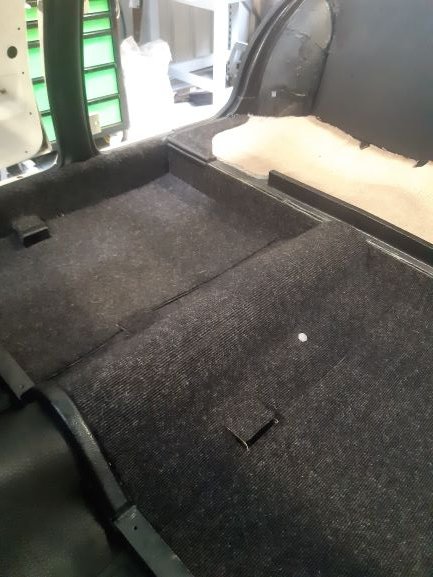 The original carpet/ rubber mat underlays were very second hand and smelt badly, so new ones were fabricated. This also included the two hessian covered ones, that run lengthways along the transmission tunnel. 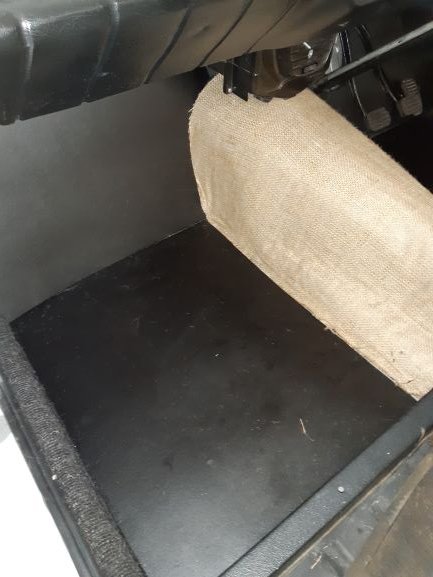 The original underlays were made of a compressed copra type material, which was sandwiched between two layers of bituminised cardboard. Clark Rubber, sell an automotive water-resistant underlay material which is ok, but frays a bit when cut. Anyhow, it will do. 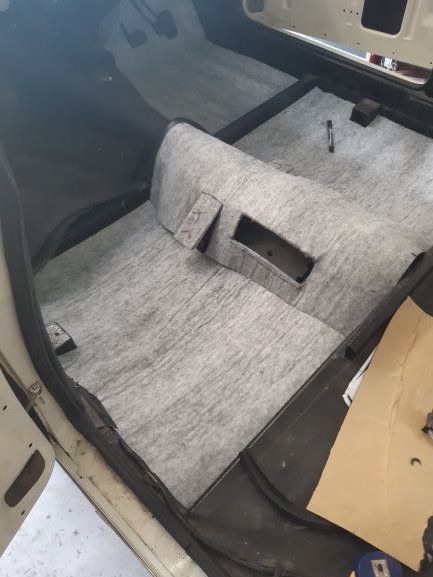 The original rear underlays were great for templates, 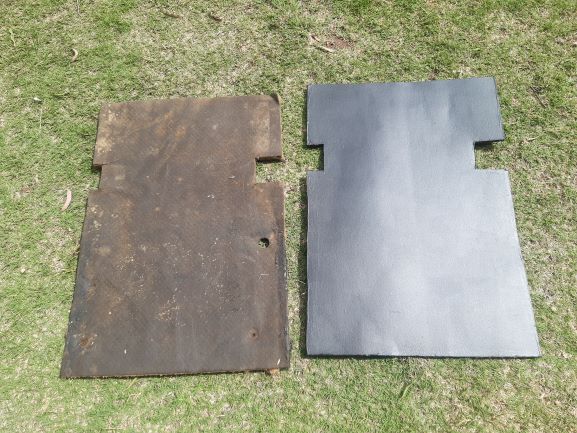 but the front ones had long since gone. Actually, I don't recall there ever being any.

Orminoid brushable sealant was used to bituminise the cardboard. Both sides were done just to be sure. As I didn't like the fraying/separating underlay, all the edges were painted/sealed as well. 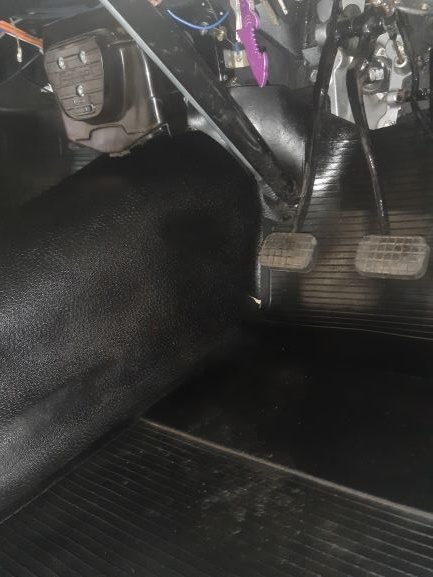 The carpets etc., will be removed before sea trials, well dousing extensively with a hose anyway. I want to ensure all doors, vents and seals etc., perform as expected, prior to affixing the carpets permanently.

The panel behind the back seat which acts as a dust seal with the boot compartment, has also been reproduced. Again, bituminised cardboard as per original.


New gaskets for the roof rack plates have also been replicated. Not sure what the material used is, but according to the gasket material company where it was purchased, assured me that it will outlast the car and not be affect by any UV etc. It is also paintable, so when doing the final touch ups, the gaskets will get a wipe over. 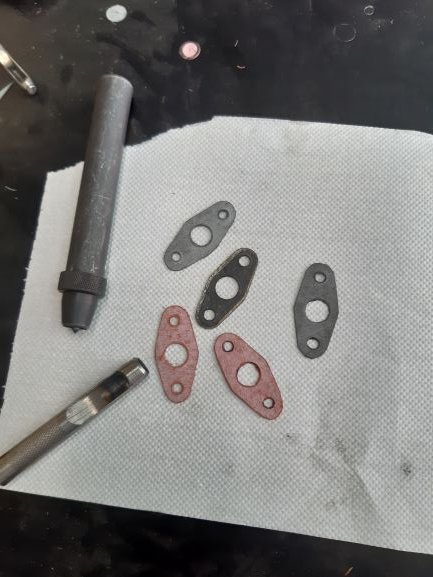 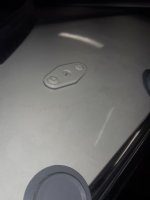 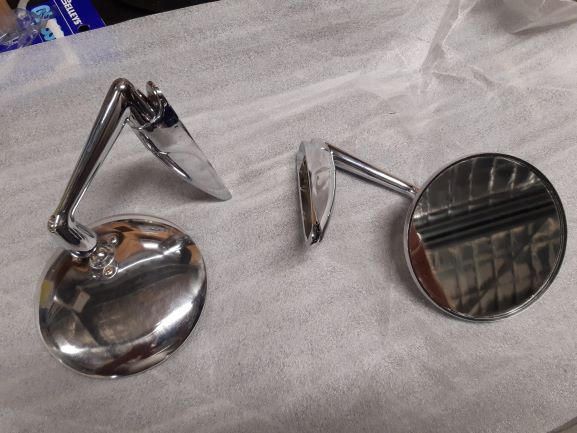 Brake and clutch systems bled. There is minimal initial travel in the clutch pedal as the pivot hole in the pedal lever for the actuating rod was welded and re drilled, when the pedal box was overhauled. The brake pedal is firm and holds steady. Handbrake cables are taught and will need re-tensioning when they settle in after a while. Have yet to play with the gear selector linkages. They are very close, horizontal plain lever is a fraction out.

All lights and instruments work perfectly.

This is what the exterior looks like so far. 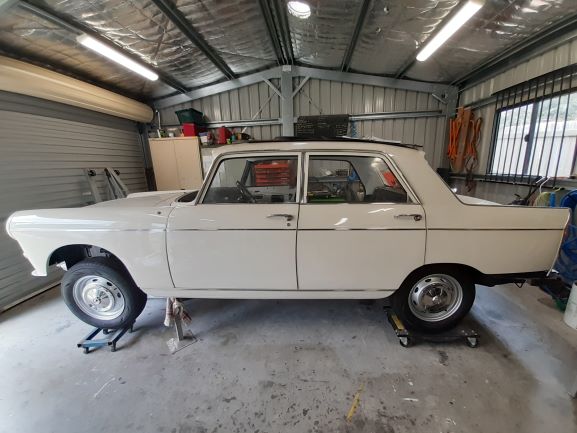 It is getting very close, almost time to drag Dan back to help with the finishing paint/polishing work plus front and rear screen fitment.

Looks great, Dano. If I remember correctly, you have a 203 waiting in the wings for a resto? If so, will we have another series?

Yep, sure do. Belle is in waiting. https://www.aussiefrogs.com/forum/index.php?threads/project-belle.118683/
Pretty sure that I have just about everything required to complete her restoration. Engine bearings are the only thing that jump to mind. Will have to see which of the three cranks I'll use. Been buying bits and pieces over the last 5 yrs as they popped up. Hopefully, it will not take anywhere near as long as Keith. I'd be very long in the tooth, if it is the case.