Expect to find myself in Sydney with some free time on Thursday and possibly Friday.

I would like to get the Xm's windows tinted, and I am keen to get Ceramic tint film. However my O'Brien Glass outlet here in Armidale has never used Ceramic film, and seems to be taking an absolute age to get some in for me.

Can anyone suggest a good place in Sydney that a) would have Ceramic film in stock, and b) might be able to fit my Xm in later this week.

Ha ha, they are going to swear a lot when they count the windows...

Yeah but I don't want to tint all thirteen.

Am staying in the Blue Mts now for next few days - drove down from Armidale today. Does that count as a road trip?

Photo taken on the descent from the crest of the Liverpool range, en route to Merriwa. Sealing of this road has only recently been completed (traffic lights are due to post-upgrade land-slips), so I lay claim to being the first Xm to travel this road since sealing was completed. 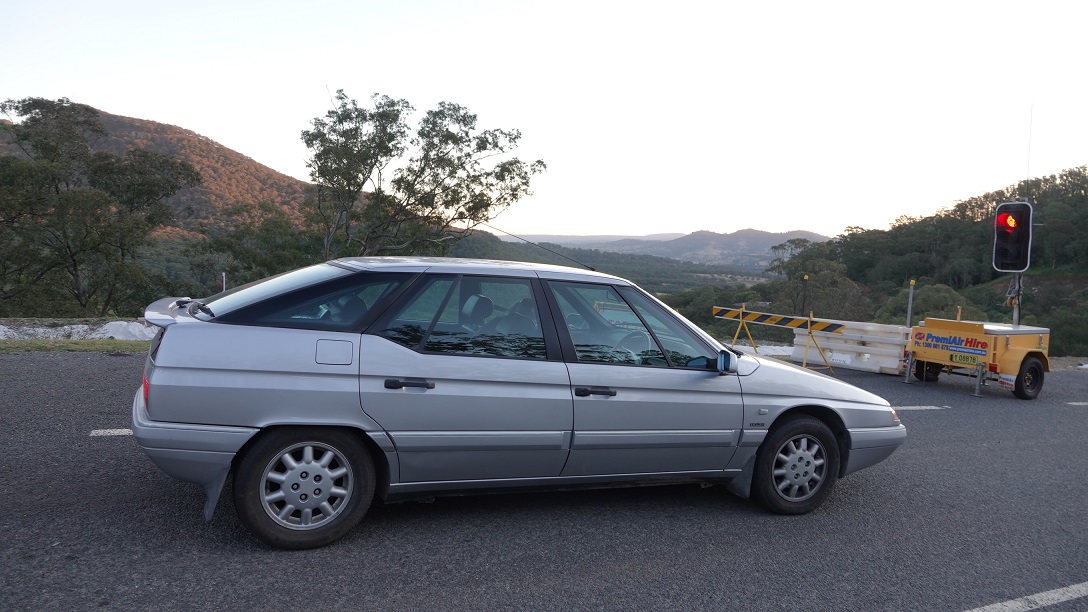 Who knows? Might be the first Xm to ever travel that road (no doubt UFO will disagree)

I thought the road from Willow Tree to Merriwa was sealed already, even though a goat track in places.
Car looks awesome by the way. You can see where the Xantia came from.

Where next after Merriwa? Is this any easier than coming through the Hunter Valley and Wilberforce?

68 404 said:
I thought the road from Willow Tree to Merriwa was sealed already, even though a goat track in places.
Car looks awesome by the way. You can see where the Xantia came from.

Thanks for the comment on the car - I still want to get the windows tinted - I think it will add an air of mystery! It also needs to be quieter, so a generous application of dynamat is called for, and proably a quieter muffler. Seats and ride very comfortable - arrived in Leura not at all stiff and sore - but it does need better headlights (a known XM issue). I find driving at night without good lights leaves me very tired

North side from Willow Tree to the base of the range has been sealed for some time. South side of the range was sealed (but very narrow). The climb up the range on the N side, and maybe the first 10 km leading away from the S side were unsealed when we first went over there in the 406 about 5 years ago.

Possibly as much as 2 years ago, the council started on the S. side. They have completed sealing the road to the base of the climb, and widened the very narrow descent on the S side. This took many months, and although Google continued to recommend that route, arriving at the wrong time could leave one with a 40 minute wait before being allowed through. Then they moved onto the N side in the last few months, where the road was already wide enough, so they were able to seal the climb much more quickly.

So that should be that - except that the sharp eyed among you will have spotted the traffic light. Apparently the new construction on the S side was not done as well as it should have been, as 2 sections have slipped (just like a NZ road really). So they have put up barricades to reduce the affected sections back to one lane, and 2 sets of automated traffic lights to make sure we don't meet other traffic by accident. So what Google now believes to be the quickest way still has holdups.

This time there was a new addition - at the foot of the range on both sides, there are road work signs, reducing speed right down as you approach a mini-maze constructed from concrete crash barriers. These seem to be designed to prevent heavy transport using the road over the range. I would have thought signs indicating a weight limit would have been enough, but perhaps the council doesn't trust the truckies to do the right thing.
Last edited: Jun 16, 2020

seasink said:
Where next after Merriwa? Is this any easier than coming through the Hunter Valley and Wilberforce?

We are heading for the Upper Blue Mts. rather than Sydney, so we usually aim to come in from the Western side via Lithgow.

We turn right at Merriwa, and head West along the Golden Highway, past Cassilis, then turn S and head to Mudgee via Ulan coal mine (the mine is well lit, and quite spectacular at night). I have a couple of times taken Ringwood Road through the Goulburn River National Park, which meets Wollar Road, which takes us to Bylong, and thence to Rylstone/Kandos, and on to Lithgow.

Wollar Road is now sealed between Mudgee and Bylong (presumably for the benefit of the coal mines), but the section of Ringwood Road through the National Park is unsealed, and usually in poor condition, with plenty of corrugations. Have come that way a couple of times in the Xantia Wagon, but struck trouble last year. Just after getting onto Wollar Road, the beeper went off (& Stop light came on) - a quick and dirty repair (not done by me I hasten to add) to the return line from the regulator had reached the end of it's useful life and was leaking badly - it's demise probably hastened by yhe rough road. Haven't been allowed to come that way since .

Haven't been via the Putty Road in a long time, and haven't tried the Broke Road since I was a young lad on a motor bike!
S

I suspect the Putty Rd, then via Yarramundi & Springwood might be quicker, though less scenic.

One of our aims is to avoid all the towns, and their speed cameras, in the Hunter Valley. We do use the Walcha/Nowendoc/Gloucester option at times, but not a good choice if it means travelling along Pennant Hills Road at rush hour.
S

Pennant Hills Rd is a depot for heavy lorries at any time. Avoid!

If you don't know it, Springwood Rd over Yarramundi Bridge climbs up to the mountains, and is easily accessed from Windsor or Richmond. I had that in mind if you use the Putty Rd. I understand the speed cameras. They are common in outer Sydney, run by contractors.
A

There are lots of window tinters in the blue mts.

alhantos said:
There are lots of window tinters in the blue mts.
Click to expand...

Thanks Andy - turns out I don't have the time available that I expected . Oh well, next time...

PS - I see the Activa went to Tassie!
A

Hi,i just thought that you could do it locally;the Activa did go to Tassie and he's very happy with it.
You must log in or register to reply here.