Currently preparing for the Historic event 28/29 November. Only 1 pit crew permitted and no spectators due to COVID-19 restrictions. Temps predicted to be around 40 degrees. At least we get to race. I guess 40's will be lower temps than the 47 C degrees at Bathurst in Feb this year. I'm sharing a garage with a F5000 that holds the lap record. Pity no spectators to see the action in our race which includes Penske, March turbo indy cars, Steve Webb in his Repco Brabham Sports and F5000's.

The understeer has been sorted since the last Eastern Creek event. 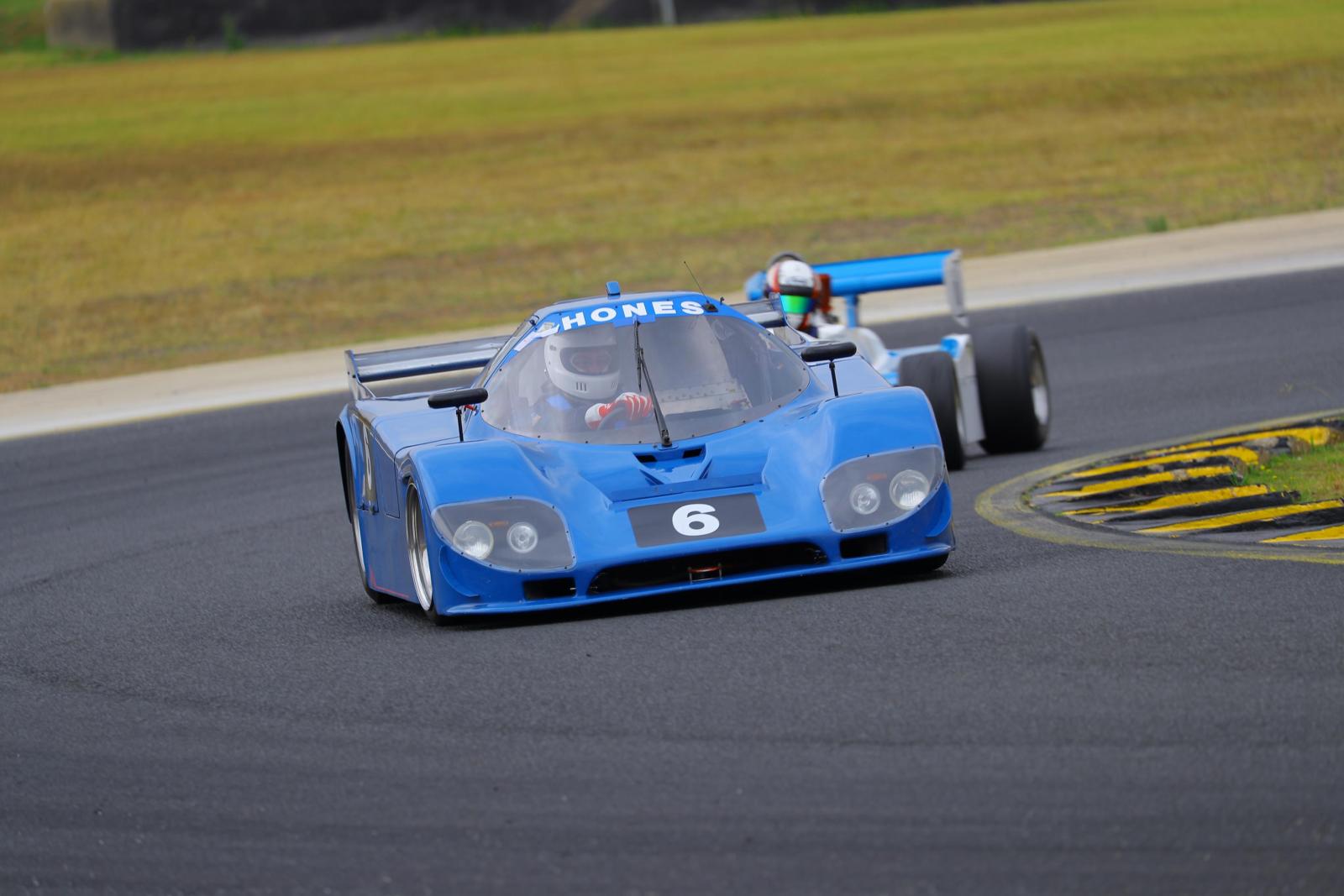 Nice photo! Is there a thread about your car?

Sorry, no can do since its not a Renault. I have a few threads on my Renault stuff. Although is has a PRV dissi cap to make the Odd fire Chev V6 operate. Bit bigger than a PRV though at 5000cc. I guess it slips through the cracks as a motorsport post until someone objects.

+1 we are all inclusive!

And yes, tell us about the sports car already.

A decision on an additional pit crew on Monday is too late for me to arrange a suitable person on 3 days notice. Over half of the sports and open wheel cars I usually see on the entry list have not entered because they cant be serviced and moved around by one crew member.
It's Geoff, used to be state manager of CAMS before ARDC for a few years. Is he involved in the event ?

Sorry to hear that, difficult times. FYI they started this process months ago but NSW health is what NSW health does.

Nah not involved with HSRCA (that I know off) I bumped into Geoff as he was assisting a promoter the other night.

Enough about us, we need photos of your sports car!

Just to prove the Renault connection, first pic shows the PRV dissi cap. Odd fire, note two plug terminals close together then a gap to the next pair. Sounds like: Boom-Boom ------------Boom- Boom------------ Boom-Boom. The engine has harmonics which are very hard to manage.
Chev built a small run of Camaros for the IROC series with an Alloy V6, 4 bolt mains. A small block Chev V8 with two cylinders chopped off. The reason was to homologate an engine as the rules for Indy car at that time required a 'Stock Block" from a production car. Needless to say all those Camaro engines finished up in race cars.

I have to go the shed and keep on with the preparation now, cheers. 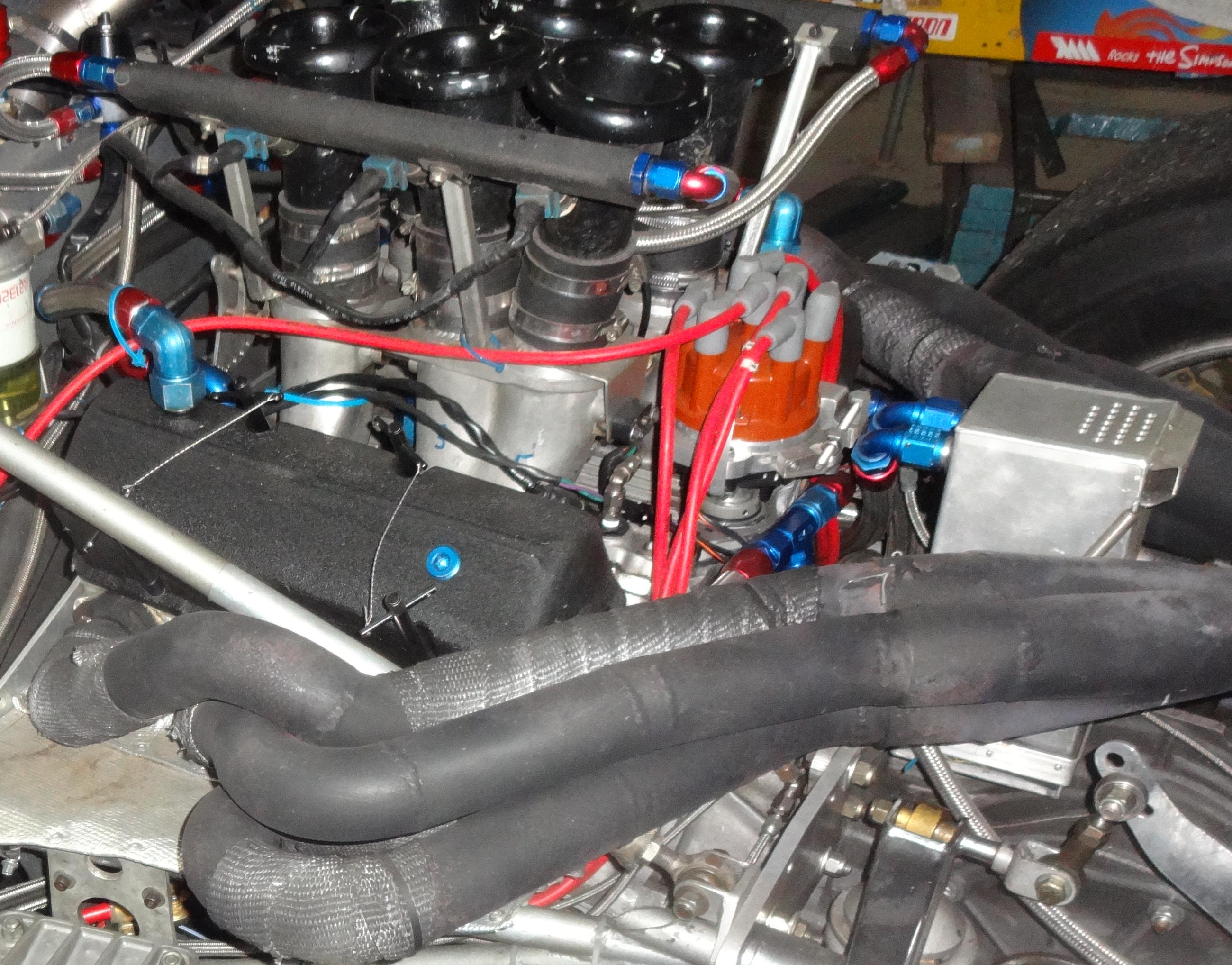 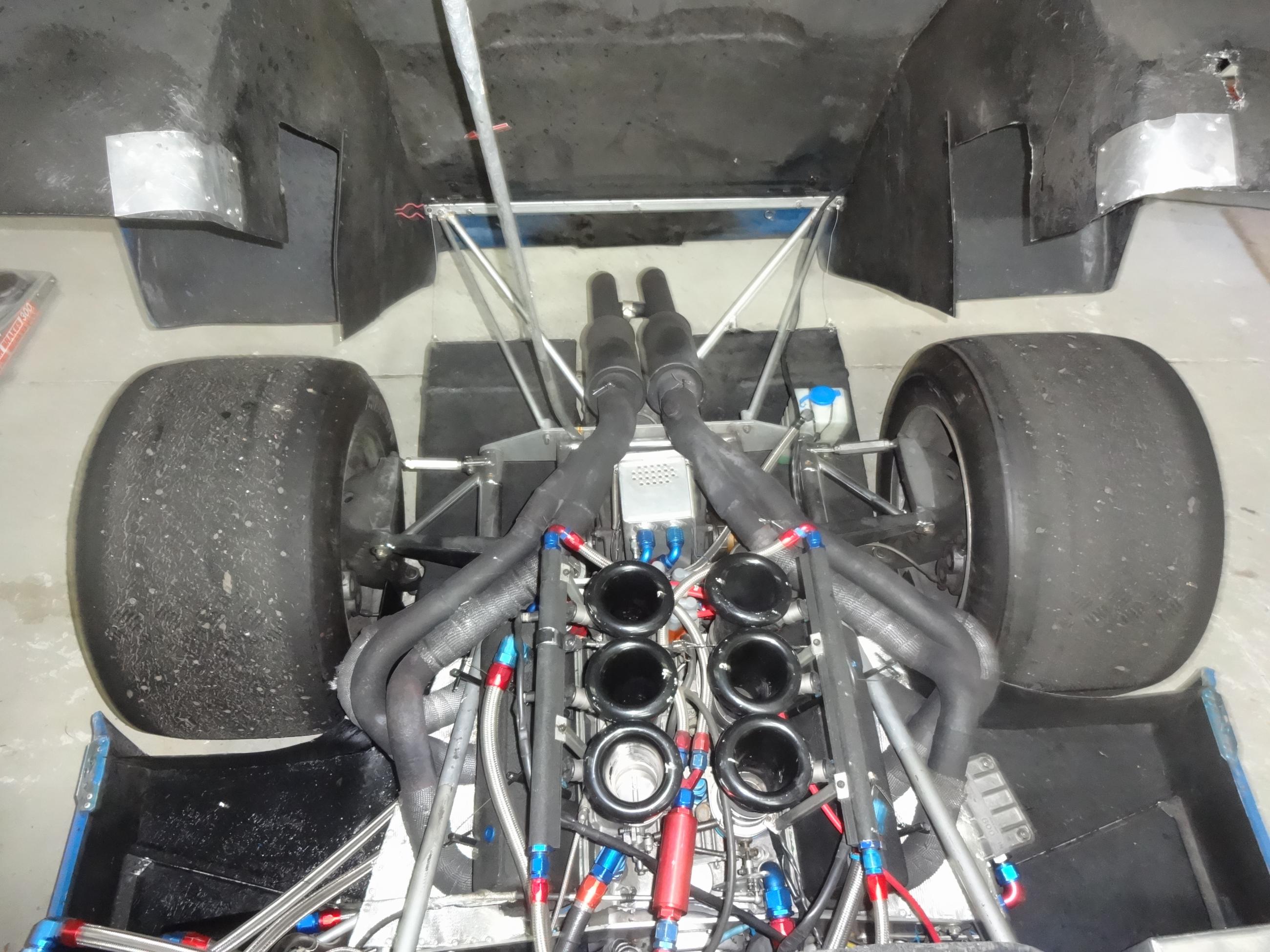 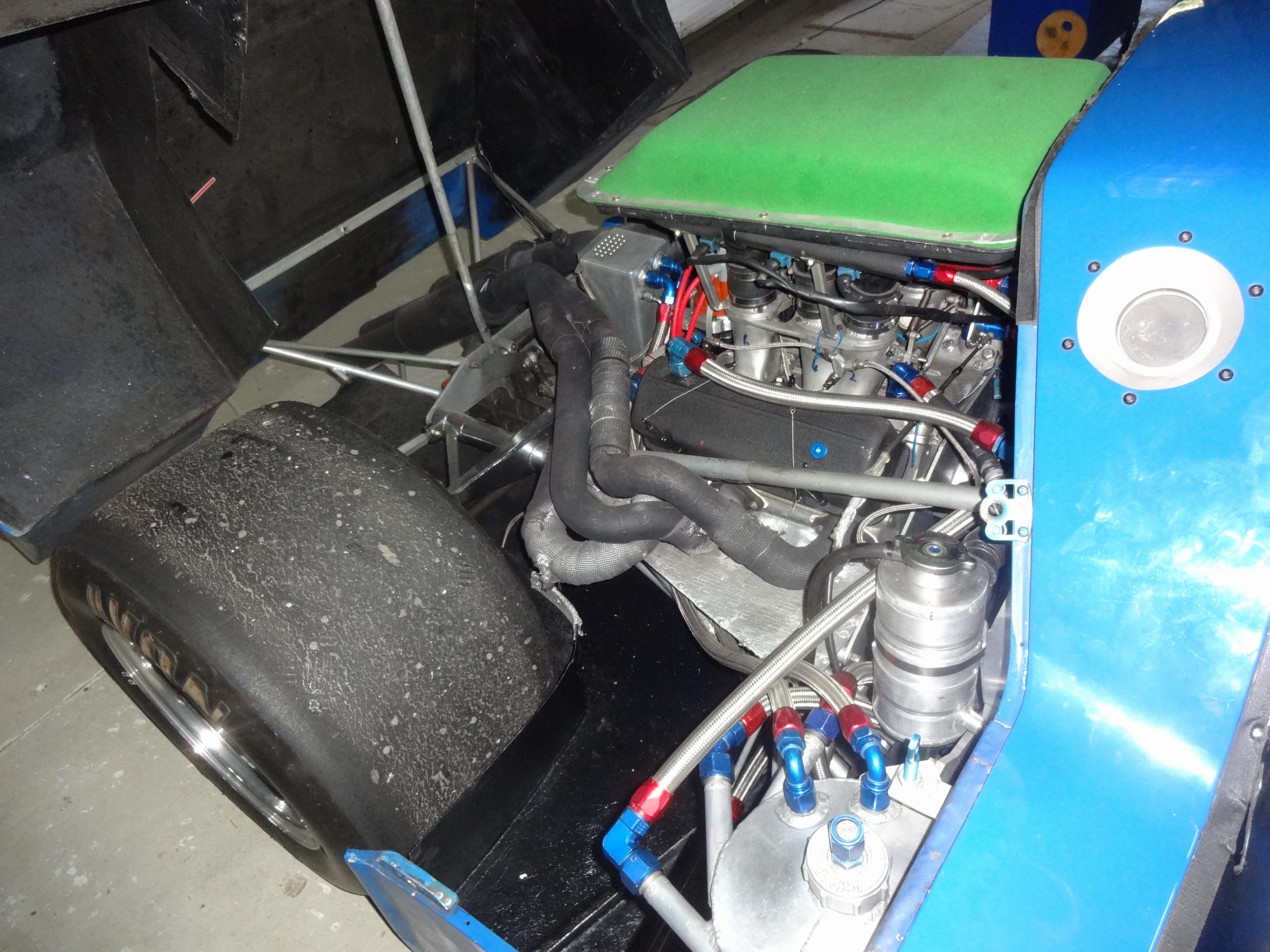 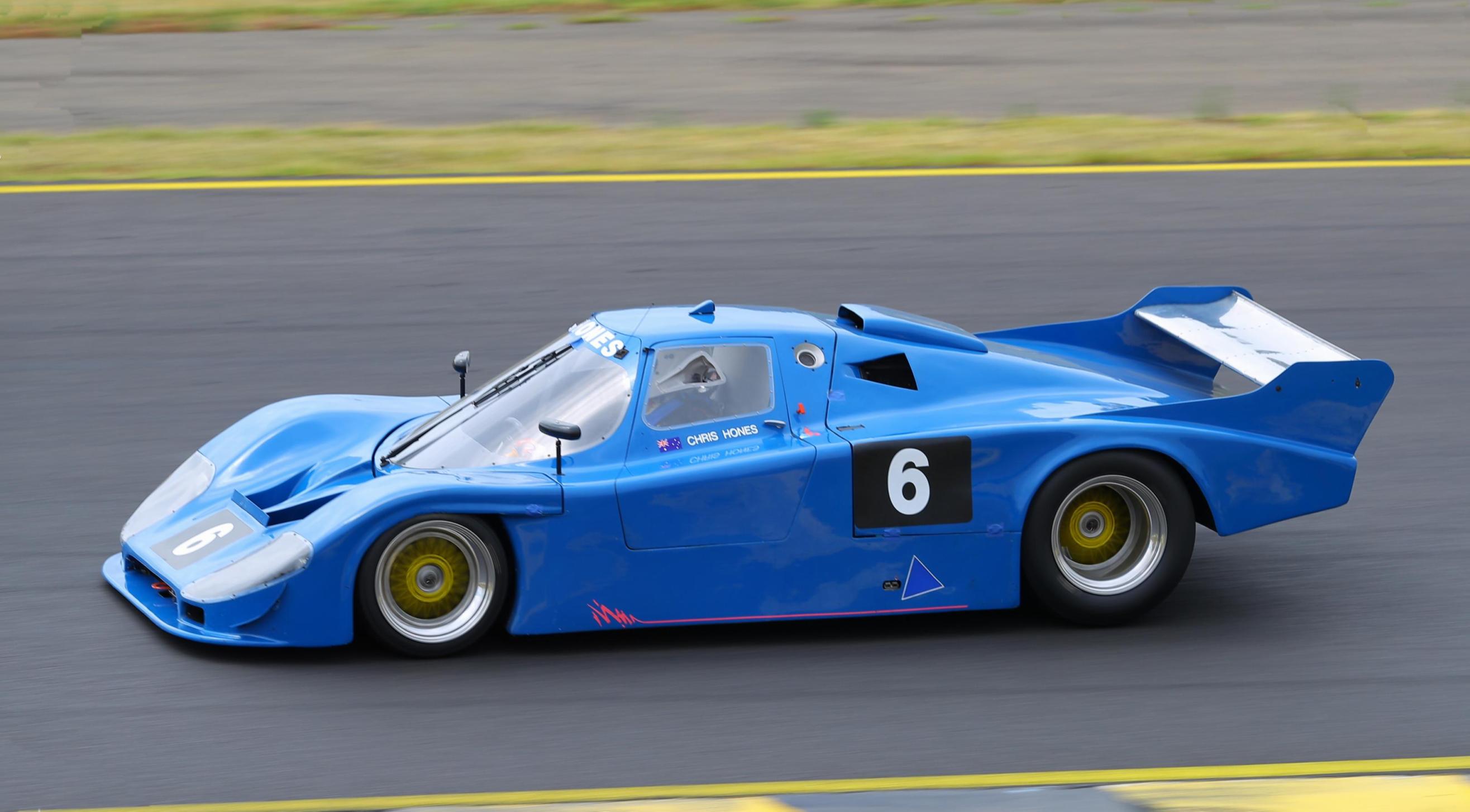 Such a cool thing.

Predicted temp now 40. The Renault R8/R10 air vent in the cabin will be useful. No cool suit either, it's from the days of real race cars. The hot air from the front brakes, radiator, water lines and oil lines all seeps into the cabin too. 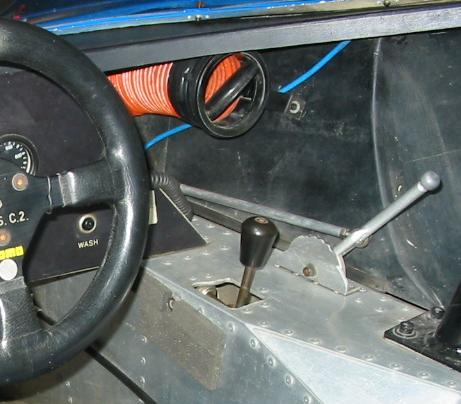 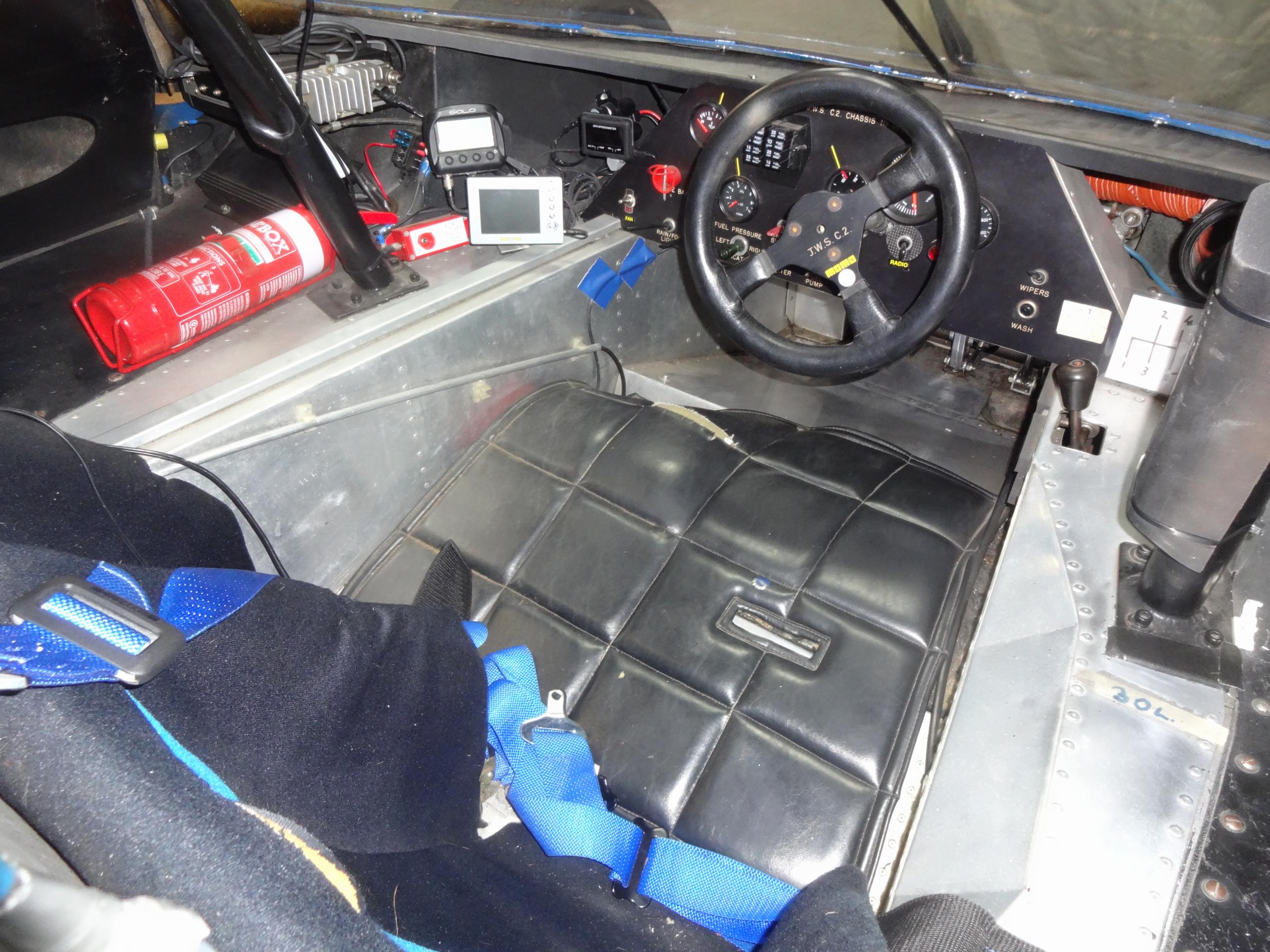 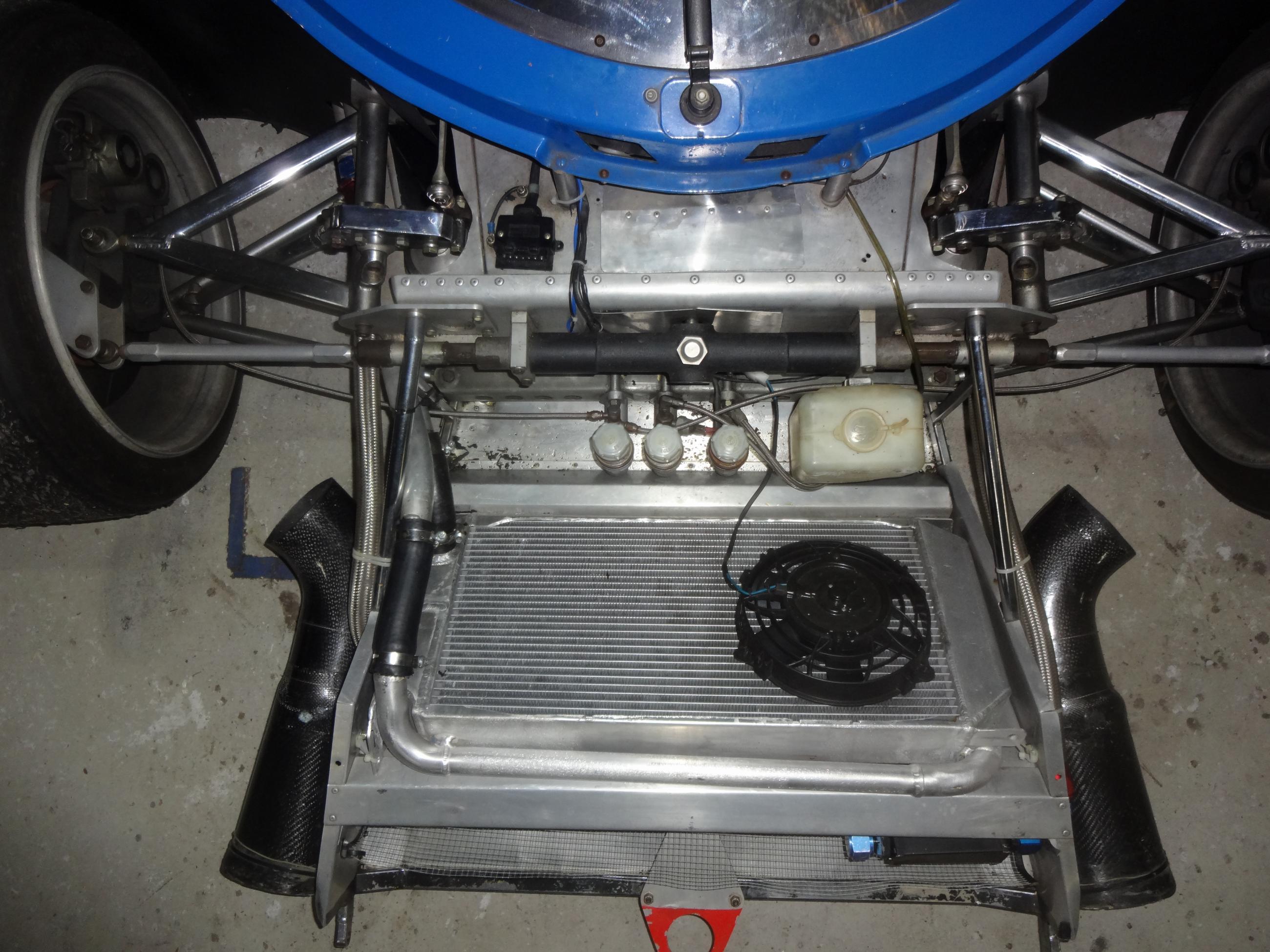 Love to hear an audio clip of the engine at revs.

Dano, the Odd fire V6 sounds so good that Warren Luff ( 3rd at Bathurst in supercars - Walkinshaw Andretti United) sent me a text after I ran the car at Bathurst in Feb. He was so impressed with the sound of the thing going down gears at the end of conrod then accelerating up pit straight that he rushed up to the pit wall and stuck the phone though the fence to get a sound grab.

Was looking forward to the event, a couple of years ago we shared a garage with an F1 Ferrari from the Turbo Era, the Michele Alboreto car. 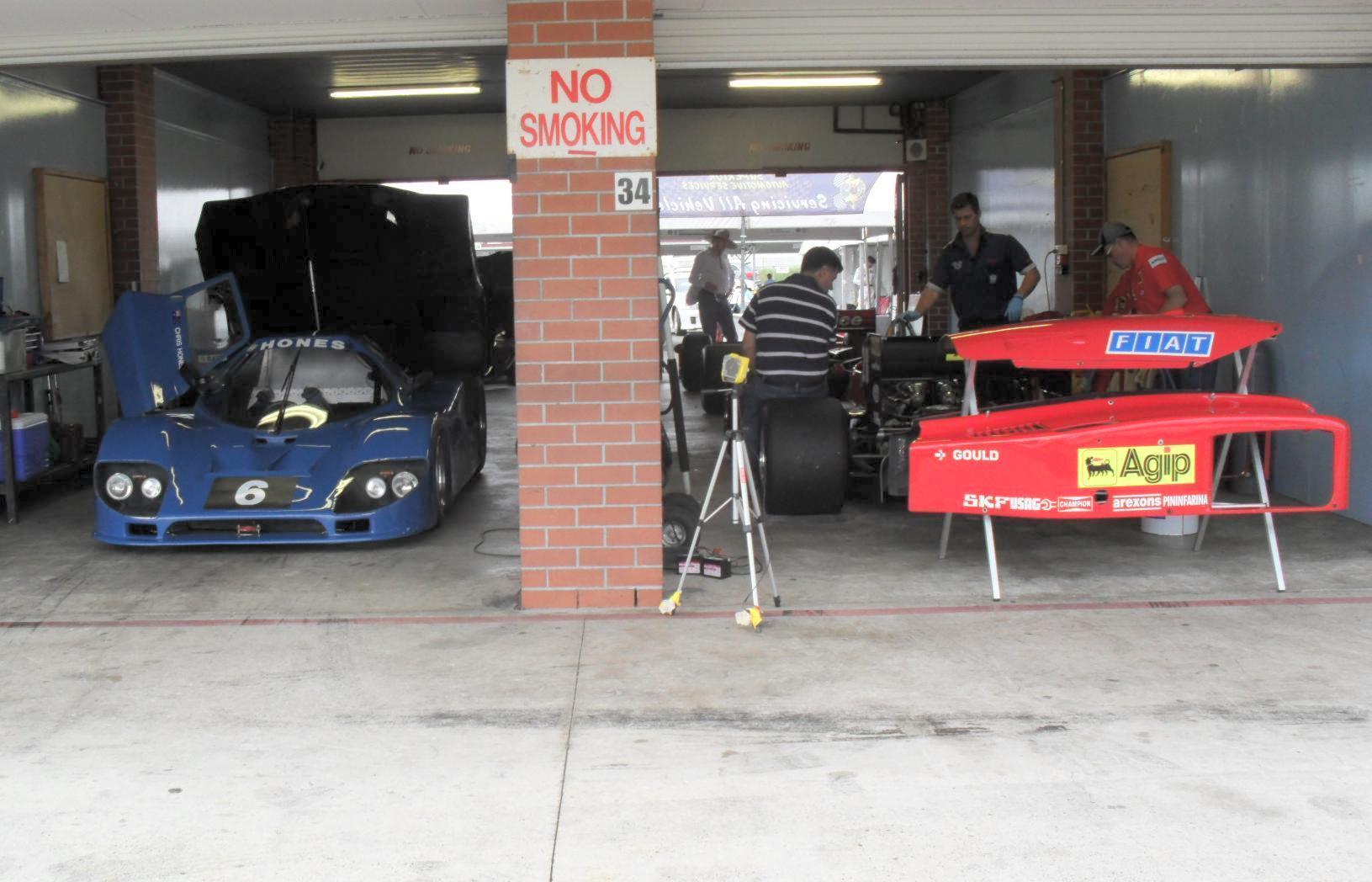 Well, a few days ago, car prepared, ready to race and loaded. Checked HSRCA event documents, contacted event management, queried traffic flow for entering pit/paddock and requested further info on their COVID-19 safety plan for minimising contact. Unfortunately, based on the response from event management, under our team safety/risk management process we chose to withdraw the entry.

Natsoft race results for today, shows 8 practice sessions for different categories this morning, based on the lap times for today, all sessions on a shortened track, none of the racing scheduled for today as yet. My guess is either the track could have started to break up in some sections due to the extreme heat or they are short on officials to run the whole circuit which is why they have changed to a short track for today. I am sure Bowie will tell us when he has time after the dust settles. Very hard conditions over 40 C with strong, hot, dry winds

Only 7 cars started in Race 2 of the group I would have been in yesterday and only one five litre car, a sports car, no F5000’s. 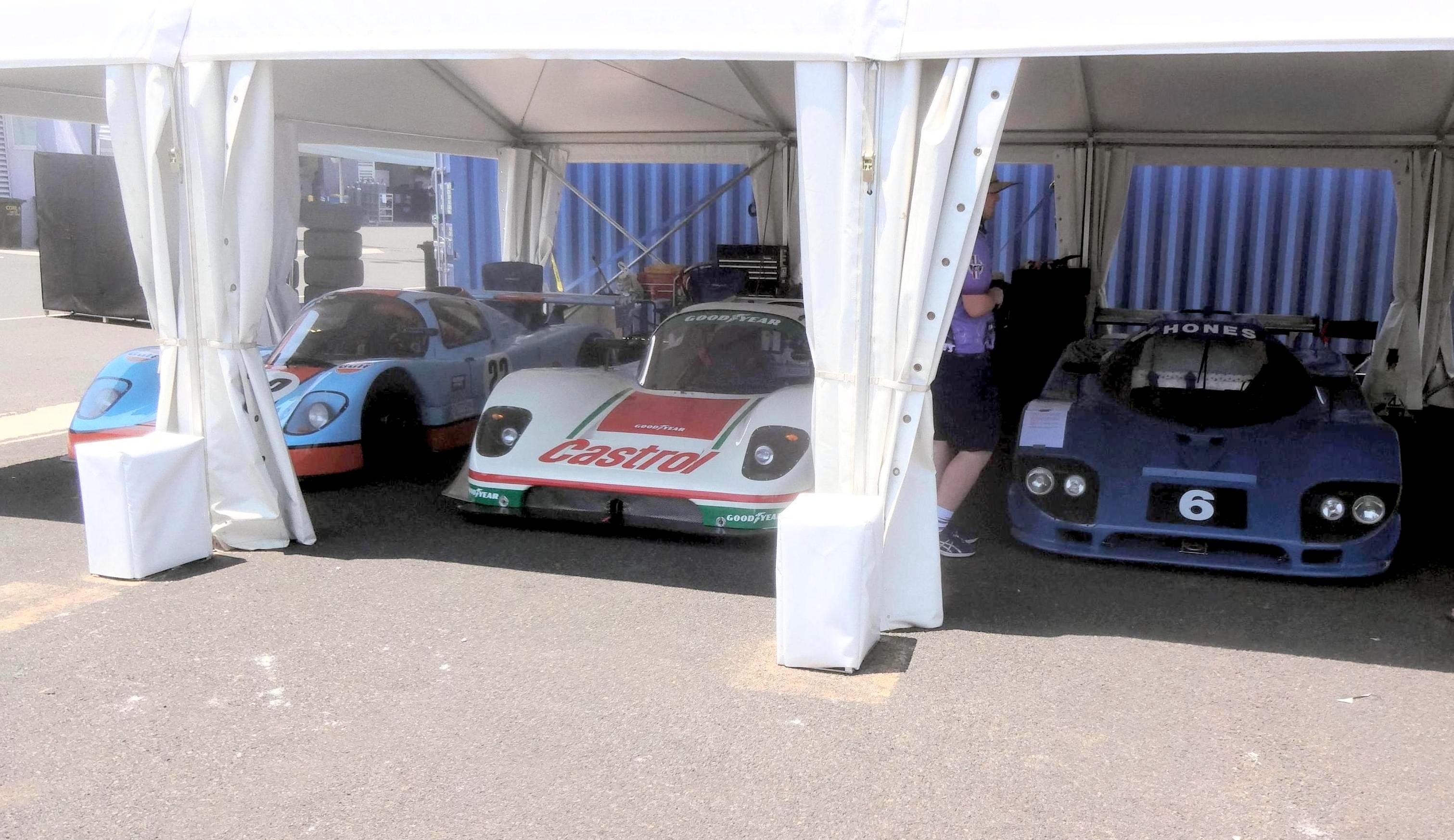 Stewards agreed to allow the meeting to continue on the Druitt circuit after the roll call was settled in this morning with literally, who was left standing after the brutal day in the sun yesterday. We were down to a handful of flagies, the conditions were horrible.

We had a few close ones, a fuel line blank of a DCOE vibrated free and it was pumping fuel straight up in the air, creating a lovely fine vapor in the hot air before settling on the ~60+ degree bitumen in front of the incoming field. The driver noticed something was weird and had the fortune to look over his shoulder to see the fuel vapor, he shut it off and rolled back into the pits (he was just entering the main straight). This was enough for this ol' dude, rightfully deciding "that was pretty close" and retired the car destined for his mechanic no doubt to check everything and wire every fastener together.

And as of 2pm, the air cooled Porches and VW's mostly survived! A couple retired early during their shortened events but it was unclear if the driver, or the car has just had enough. To be fair I suppose our circuit is pretty quick so there is ample opportunity for air to blow over oil coolers.

We were also met with a decent westerly breeze so not even the umbrella could be deployed to keep the sun of the drivers on the dummy grid.

And to the credit of the cat managers and drivers they didn't stink to much about being put on the shorter circuit. Some of the historic Formula Ford guys commented on how great it was as they never get a change to drive the Druitt circuit.

HSRCA had approval from NSW Health to have ~800 on site at the very last minute, they had allowed drivers to now bring 3 x pit crew each. However we ended up with but half of that each day, no doubt in reflection to how crappy it all felt being outside.

And HSRCA deserves to be more popular then they are. It is the only club that we deal with where the organizing committee manage to enter their own cars into their event and get out there on the track, I suppose that may or may not reflect some of the stuff you had to deal with Chris.. Either way, the vehicles that their members look after.. Geee's this really is the basis for an Australian Goodwood if we could get organized and develop something.

I've always wanted to create a series of short courses at our track, Like starting on the dummy grid and racing up to gate A, turning around and heading back to the new round-a-bout, exiting that and heading back into the Amaroo paddock, entering the pit lane and then turning around and finishing at Turn 4. That is near enough a 1.9km sprint, and we could have spectators close close close. It would suck for the big cars but it would be a hoot for us small car owners. Ah well I can dream at least 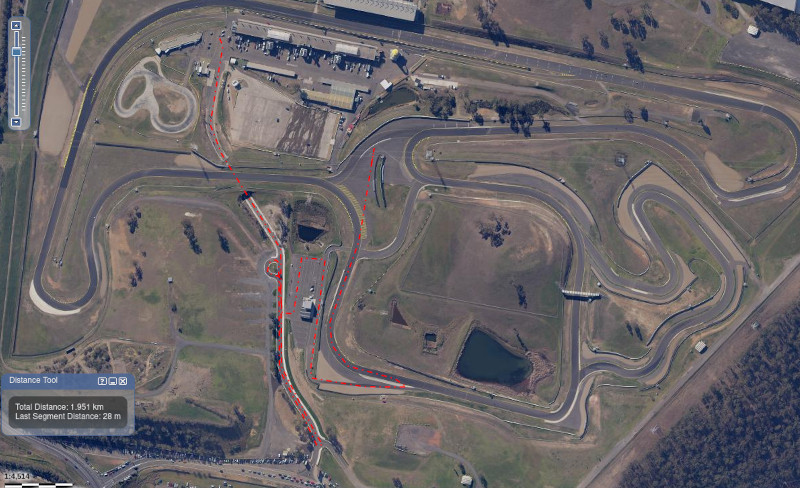 Beer time for me, I snuck home early, err delegated my responsibility.

Yes, but no one could get in or out once the event started?

Nah heaps easy, we'd use the festival gates, and allow spectators on to the race track and use the t4 gate to get into the north paddock.

You could even open up corp hill again to view from easily enough.

And we haven't even talked about using the T18 gates and the Bowl (Amaroo extension) to create a rallycross course.

Exhibit a) Green is where spectators would be permited and the black is roughly the route they'd take. Having beers on corp hill seeing everything would be mad. 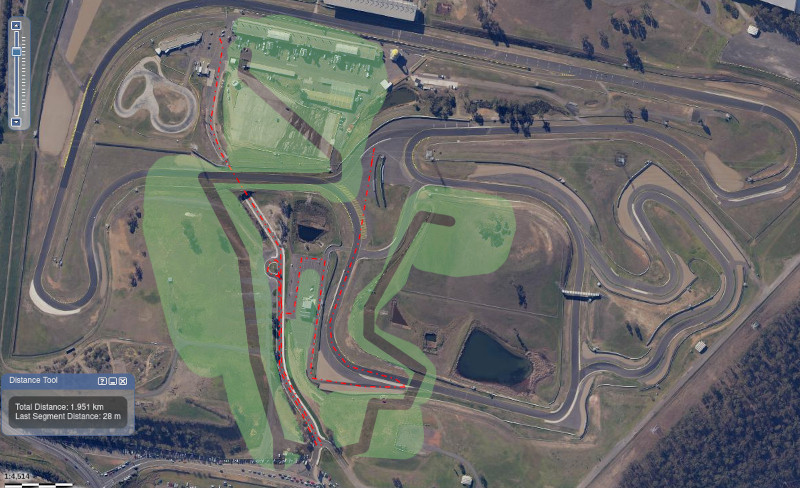 And Exhibit b), the rally cross course. Again spectators allowed where the green stuff is. We are taking advantage of the grandstand gate on the main straight, and the bowl gate, along with the access road that just doesn't get used enough. There would even be a gnarly jump into the P4 carpark just in front of the festival gates.

With a bit of faffing you could run both at the same time. We nearly have our Goodwood everyone! 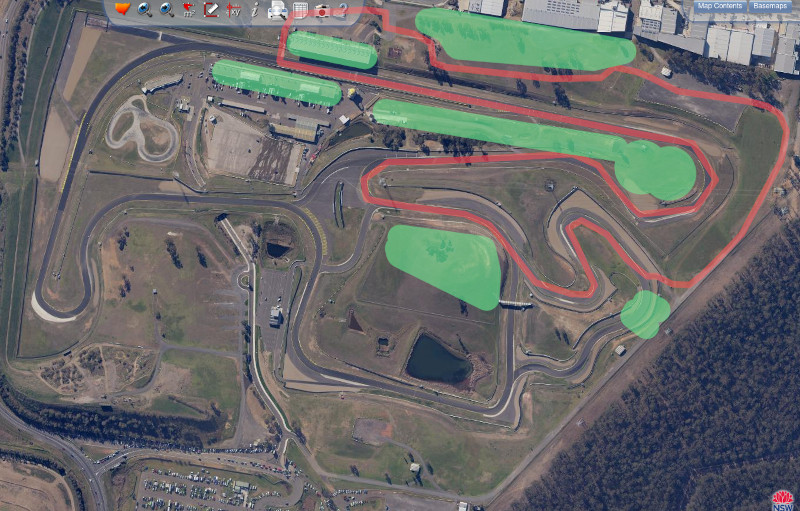 Hey guys, before any plans for a hypothetical event, I have to aim for the next historic event at the venue. I am just a customer who requested an accurate pit/paddock traffic flow map explaining traffic flow for support crew/vehicles for the whole 3 days of the existing event plus details of the COVID-19 safety plan the organisers will have in place for me and my team.
You must log in or register to reply here.
Share:
Facebook Twitter Reddit Pinterest Tumblr WhatsApp Email Share Link
Top