T.J. Richards bodyworks at Keswick had been bought after the war by Chrysler Dodge DeSoto Distributors, a consortium of 18 dealers including Harden & Johnston and Canada Cycle and Motor. After the wool boom ended import restrictions were introduced to match falling export income. Prime Minister Menzies announced that no country could import more than it sold overseas. In early 1952 importers were limited to 60% of 1951 imports, so nearly all importers looked to local assembly. Although T.J. Richards had since been sold to Chrysler it still did contract assembly for other companies (eg the Standard Vanguard Ute). So Harden & Johnston sent Bill Swanbury off to Sochaux to negotiate local assembly at Keswick. The first Chrysler assembled 203 was delivered to Wentworth Motors in Perth in June 1952 and bought by Harry Smith at Narrogin ( most likely his car 99 in the first Redex). Sydney assembly at Roseberry began at the start of 1954. Canada Cycle went their own way assembling at a small plant in Tottenham and then Keys Rd Moorabbin.
I don't know the freight arrangements to Sydney. There was a daily fast goods rail service between Adelaide and Melbourne that used to carry unfinished Holden van bodies from Elizabeth to Dandenong that was well able to carry the cars but the change in gauge at Albury would have been a pain.

You have an enviable collection of ‘photos, many fascinating ones

I may have bits of one and am seeking historical detail

You have an enviable collection of ‘photos, many fascinating ones

I may have bits of one and am seeking historical detail

Alas no. If they have a photo archive they haven't shared it. I wish I'd taken more photos. I watched the Regans 404 in a six hour race at Sandown do a barrel roll on the S's as if in slow motion and I didn't have a camera. There are so many people and cars I don't have photos of.
A

Russell Hall said:
Alas no. If they have a photo archive they haven't shared it. I wish I'd taken more photos. I watched the Regans 404 in a six hour race at Sandown do a barrel roll on the S's as if in slow motion and I didn't have a camera. There are so many people and cars I don't have photos of.
Click to expand...

Note to self: Must try harder

Had heard that they rolled one at Sandown. They did quite well despite this. Uncle of Jan's was mechanic for Simca team and he worked out that they were lapping at speeds that only the really hot MGB's of the day were able to achieve, so despite being officially "series production" one suspects that a bit of thought had gone into the innards

Some drivers have no trouble with their roll techniques.......

The launch of the 403 in the U,S.A. in 1958. On the far right of the picture is the motoring writer and brilliant publicist Walt Woron who organized the launch. Second from the left is John Bond, publisher of Road and Track who Woron got onside. Bond's list of the seven finest cars including Peugeot was used to great publicity advantage even in Australia. Woron successfully promoted the car to the influential end of the motoring press and some journalists like Warren Weith owned them.
Peugeot were under pressure from the French government to export and the operation was successful at first with 20,000 cars being shipped in 1960. They were sold through the Renault dealer network which was large and established but ultimately brought the operation undone. The Dauphine had proved popular but it proved unreliable and buyers deserted the make in droves. Peugeot was tainted by this poor reputation and sales collapsed never to recover. Some 403's were even shipped back to France.
Walt Woron took over the Renault sales operation in the U.S. but couldn't recover the loss of market confidence. When the R8 was launched he took the tack of apologising for the unreliability of the Dauphine by saying "we tried to sell the skin of the bear before we had the bear."

The Peugeot range in the UK, 1958. The used car pages at the time indicate at least 2 of the RHD cabriolets had been sold despite the high price. Note the claimed 70 mph cruising speed for the 203. This was because of the new 70 mph M1 motorway. The most ambitious Australian testers never claimed a cruising speed of over 65mph but an Autocar test of a 1960 model indicated it was just possible to hold 70mph on the motorway if there was no headwind.

The film is well worth watching, even if only for the infectious music (and rail cars).
R

A neat job but why cut the roof off? Beats our little gangers carts.

I don't know why they took the roof off. When it rained, the driver held up an umbrella.

Here is a picture of the mayor's car, which had a roof (but was not a Peugeot), and another view of the 404:

The mayors car is an old ZIS showing its Packard inspired styling.
R

This advertisement from West Australia shows why the 203 became established in Australia and is echoed by similar stories in Sydney newspapers. It was such a strong, well engineered vehicle well suited to Australian road conditions outside the cities. The road crossing between WA and the East was a wartime graded track with limited supplies available in stations along the way. Hence the fuel trailer. In 1950 travelers actually carried mail and supplies on to the stations. The cars chosen for the crossing were always large, Humbers or Packards and the like. It was considered newsworthy when a small car like the 203 successfully made the journey there and back. The 203 became something of a vehicle of choice for travelers wishing to undertake the crossing.

This is a test at Montlhery in 1950. The 203 was driven flat out for twelve hours at an average speed of 132.5 kph. There were not many cars made in 1950 that could be driven flat out for twelve hours. British long stroke engines would exceed critical piston speeds. Autocar pointed out that the 203 incorporated nearly all the latest advances in automotive engineering but the engine was somewhat detuned to allow flat out driving.

Before the war some French military expert thought up the idea of using the 202 decouvrable as a mobile anti-aircraft weapon. Looked impressive but provided no protection for the crew. The Stukas had no problem sending them running for the roadside ditch.
Another "it seemed like a good idea at the time" moment in history. Alongside the decision of the Spanish Republic to convert some 202's into armored cars in Barcelona during the civil war. The bodies proved too heavy for the 202 to move and they couldn't be driven to the front.

Delahaye put their own body on the 402. This is turning into the obscure pictures and facts about Peugeot thread.

Writer Simone De Beauvoir and her 203. 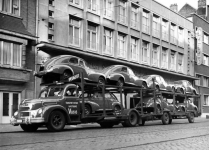 Over a number of years I've looked high and low so to speak, and have yet to find any trace (on paper, or in the flesh) of this model, the N3V - N3W, manufactured Oct. '52 - Sep. '53 gracing our shores! Quite a nice look from the back, with the large glass, and still retaining the 1st model turret line. Was probably the biggest year production run wise for the 203, with well over 60,000 of this type being produced. Anyone spotted one of this type around the traps of Oz? Wouldn't mind the nice MAN transporter outside 'Hotel Peugeot'.​
R

This model was produced in the period imports to Australia were disrupted by import restrictions. Imports for 1952 were limited to 60% of the 1951 import figure. On top of this the Peugeot commercials had been released in 1951. Whether it was by planning or unbalanced ordering the import figures for 1952 were heavily weighted towards commercials. In 1951 1419 sedans had been registered plus 13 wagons, 10 vans and 10 utes. For 1952 the registrations were 572 sedans, 118 wagons, 67 panel vans and 227 utes. It seems likely sedans were not imported late in 1952.
Now we can see that Peugeot registered 984 vehicles in 1952 which is in excess of the 871 imports allowed under Commonwealth rules. The balance are the cars assembled by Chrysler in Adelaide for Harden & Johnston. If we look at Harry Smith's Redex car we find they were small back window models. But when we go to 1953 we find sedan sales have returned to 1031. So there should be some of this model about. Import restrictions were lifted in the first half of 1953. Certainly road test cars of late 1953 show the small back window. Perhaps a production run of the earlier model was sitting in store if France waiting to be shipped in 1953?
Last edited: Jan 17, 2021
R