I have Peugeot 308 2008 36+k on the clock, recently have an oil leak at turbo supply hose, Peugeot at Bowen Hills said there was nothing! But local service found it, I had oil on the garage floor. How much should it cost to fix? They tell to to replace the coolant feed hoses at the same time as they are oil soaked. I am a woman and we, mostly, are lied to therefore don't trust mechanics. I’m in Brisbane, can anyone recommend a reliable mechanic?
S

There are several common oil leaks from this location and yes some additional hoses are recommended while one repair is being worked on.
T

Sorry for the lack of info. Petrol engine 1.6, it’s always been serviced by Peugeot at newstead, and when I asked them about an oil leak a number of years ago, they said they couldn’t find anything!! Ha. I’ve never taken it back to them, over priced and under whelming service. I have been quoted $2000 by one, then $800 by another?
D

It is presumably an EP6 1.6 turbo engine and you will have 5F? in the VIN. A common leak point is where the turbo oil feed tube enters the turbocharger and/or at the turbo oil drain pipe. The feed pipe leaks where the pipe enters the banjo fitting screwed to the turbo because the rubber o-ring inside becomes hard and brittle over time. The drain leaks when the rubber tube has deteriorated. It takes a bit of labour to get at these between the turbo and the engine block. It is also good time to look at the turbo wastegate pivot, although at only 36K, yours is probably still OK.

Coolant hoses are usually made of a rubber called EPDM and oil will soften and make it swell. Degreasing will help reveal the condition. A bit soft would be OK, but if they are extremely soft and swollen when compared to other similar cooling hoses, they might start to bloat in use when the coolant becomes hot. The cooling system has to contain, say, 20 psi. when hot. 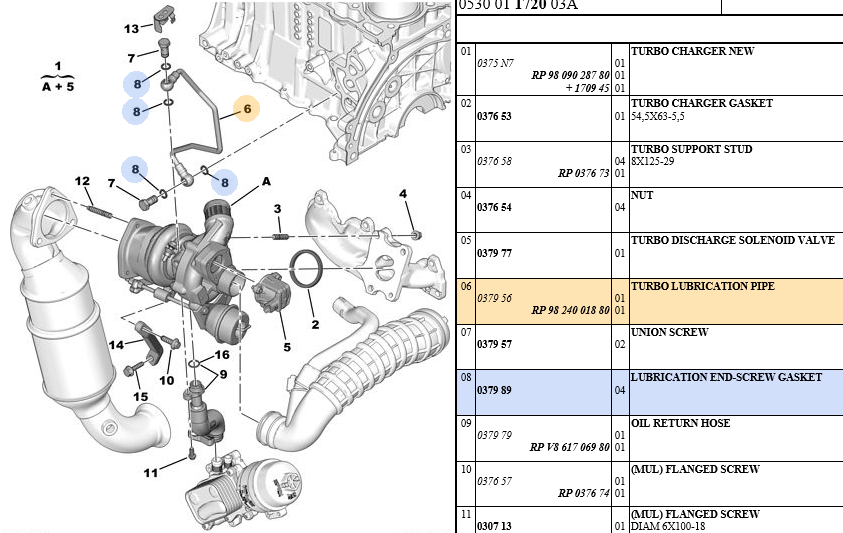 Very concise answer David, thank you, did I mention, I’m female, so even though I read it, my eyes started to glaze over, and there was a whooshing sound in my ears

.
So long and short, what you said is correct, ‘they’ told me to replace the coolant hose at the same time, does $800 sound reasonable? Seems like a lot of money, in light of Covid, and my job going.
S

That diagram is slightly deceptive re the location of the oil pipe. It connects to the engine block below the turbo, near the oil filter and cooler, and isn't easy to see from above. It's easier to see from underneath the car. There are minimum clearances from the hot metal projections near the fittings at the ends to protect the rubber seal. 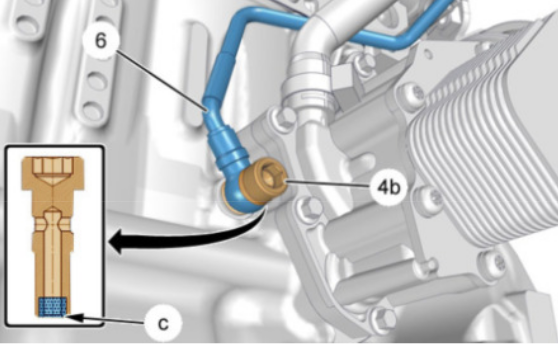 You can buy non-genuine feed pipe kits from about $60 up online so I think you could get a better quote from an independent familiar with these engines. If EAI carry them they are readily got in Australia.
Last edited: Jul 10, 2021
D

About 3H labour to replace the pipe + parts + GST. The pipe and copper seals are likely about $150 from Peugeot. The drain is more expensive from memory. Plus any hoses, coolant, nuts and bolts etc.. It could of course just need that bolt marked as 4b above tightened a little. I think I'd invest in a can of degreaser and find where exactly it's leaking first. It's not very pretty, but you might even get way with wrapping the pipe/banjo joint with self-amalgamating rubber tape and fitting some small clamps to stop the leak. Or let it leak if only weeping. The unfortnuate job loss might affect the decision here.

And I was trying to privide more info than usual to give you the confidence to assess what you had been told. Sorry if too much info. Which reminds me of an old joke ...

Why men should not write advice columns...

Dear Walter:
I hope you can help me. The other day I left for work, leaving my husband in the house watching TV as usual. I hadn't gone more than a few hundred yards down the road when my engine conked out and the car slowed to a halt. I walked back home to get my husband's help. When I got home I couldn't believe my eyes. He was parading in front of the wardrobe mirror dressed in my underwear and high-heel shoes, and he was wearing my make-up. I am 32, my husband is 34, and we have been married for twelve years. When I confronted him, he tried to convince me that he had dressed in my lingerie because he couldn't find his own underwear. But when I asked him about the make-up, he broke down and admitted that he'd been wearing my clothes for six months. I told him to stop or I would leave him. He lost his job six months ago and says he has be en feeling increasingly depressed and worthless. I love him very much, but ever since I gave him the ultimatum he has become increasingly distant. I don't feel I can get through to him anymore. Can you please help?
Sincerely,
Sheila

*******
Dear Sheila:
A car stalling after being driven a short distance can be caused by a variety of problems with the engine. Start by making sure there is no debris in the fuel line. If it's clear, check the clips holding the vacuum hoses onto the intake manifold. If none of these approaches solves the problem, it could be that the fuel pump itself is faulty, causing low delivery pressure to the carburetor float chamber. I hope this helps.
Walter
Click to expand...

David, you are very funny, thank you for the help.

Call the guys below they should be able to provide a reasonable quote.

Oil leak from the oil feed tube on top of the turbo will be easy to notice and also smell from the burning oil.

The oil drain hose is below the turbo

If leaking below it will need to be investigated.

Due to the heat from the turbo and exhaust the rubber gaskets don't last.

the job is fiddly and time consuming due to the location and number of item needing to be removed and refitted.