Anyone wanna come for a drive?

In organising the last event with the promotor, he hooked me up with a team in Victoria that was short a couple of drivers, Grumpy Racing. He knew I was moving and it was a nice way to meet some folks down here before I moved back. Anyway despite their namesake, they are a pretty friendly bunch. They all travel down and stay at a hotel at Blacktown, drink and eat to much and generally were pretty merry.

They intend to enter 2x teams of 6 cars, and have space for 3x others.

For those unfamiliar with the event, its run over 2 days, with the competitive part of the weekend running for 6x hours on the Sunday. Each team can have 1x car on the track at any given time, and generally it works as a ~10mins on, ~50mins off type thing to share the track time around over the weekend. Each driver nominates how fast they want to lap, and points are awarded for getting as close as possible, hence, being regular

I enjoyed cruising down the main strait below "normal racing" speed, more or less the speed I felt comfortable going into Turn 1, and then going as fast I could via everywhere else, It turned out to be a nice way to cool everything down lap from lap (myself included) and I had no trouble in my daily driver, a mighty white YV Commodore. Actually had a ball and fell in love it to be honest. I'm splurging with some fancy DBA pads and rotors now, might even put some nothalane bushes on it. Oooooooooh.

Car's need not be anything special, nor quick, as folks are generally well under racing speeds.. most of the time. Road registered is fine (as mine was) all you need is a helmet and to fit a $60 Super cheap extinguisher somewhere in the cabin.

The entry fee is shared via the members on the team, so you are looking at ~$450. The grumpy racing folk organised numbers and stickers and did all that crap as there are a few personalities that seem to enjoy the logistics so it works well I turned up, put stickers on my car, did my helmet up, and that as much organising I needed to do.

Here is half of them at the end of last years event, see, normal looking dudes! 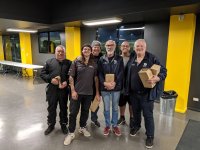 Anyway, if you feel like you've always wanted too, I'll be your friend! You'll have fun. PM me and I'll put you in touch with the teams secretary / facebook group so you can get a second opinion. Otherwise, get some frenchies together and enter a team! Just imagine having a team of 6 x 2CV's, 6 x 604's 6 x Renualt 12's (but of course) Oh how magical it would be! Heck an Aussiefrogs 1.0 and Aussieforgs 2.0 team!

I had another thought about taking the Reno.... I decided I was going to run out of time.. Still think it's a sensible position but things are getting carried away a bit with the daily VY Commodore..

It needed a few bushes, by the time I added up a couple of things, well here I was on "JustCommodores" reading a bunch of distinctly non french teenagers carry on like pork chops, anyway now I've gone and got a full polyurethane kit coming for it. :S

The kit included some off center bushes so I can get would you believe about 3 degrees of negative camber in the rear and ~2 degrees neg in the front. Goodness me! They also do some good stuff in getting rid of some fluid filled caster rod bushes so, you know, good good.

And since all the bushes are coming out, weeeeeeeeel why put the original sway bars back in? Can you believe one can pick up adjustable front and rear sway bars (~29-32mm front, & ~18-19mm rear) for all about the price of a bush kit. There may have been something to this local manufacturing..

Finally, as mentioned the front rotors needed replacing anyway, (well they would have survived around town for another 6 months no doubt) so again, slightly larger grooved rotors from DBA and "performance" pads (kids on "just commodores" reckon not to different to what the highway patrol cars used to thrash around in when harassing teenagers) to fit and heck.

That was a quick way to spend half a roll cage on a daily driver. :S Shouldn't think of it like that, that's all just general maintenance, gord knows the things hasn't cost me anything... actually no I did change the alternator, and I've just replaced the rover cover gaskets as oil was landing in the valley. No, it's got 250 thousand km's on it. I'm going to file all that back under general maintenance.

Just stop me if I start talking about plenum spacers and cold air kits please...

Ah it's gonna be fun!

I spent the late heat of the afternoon fussing over how to install the spare bucket seat into the commodore, looks like I can make a bracket to sit on the base and enjoy all the electronic tilt and height adjustments.

Also! My Dad's plans are otherwise cancelled (covid still stuffing things up) so the 77yr old may get another steer yet again! Which was the entire point of all this.

Oh! but if were just getting excited by the idea of the event.. a msg from the promotor;

WELCOME to the NSWRRC facebook site, One of the oldest still active motor sport clubs in NSW if not... PO Box 765, Narellan, NSW, Australia 2567

Our Marquee event, the NSW 6Hour is coming together nicely with entries looking strong which is a great sign!
We still have spots available though and we encourage members to take part and support the club!
Even if you don't have an entire team but would like to participate in the event, there are teams which you can join.
Please contact Ross Elliott on 0438 415 485 and he will be able to coordinate these requests.