That is another possibility . Sleeve protrusion on your car

Yeah, the thing is that the shop built the long block, so I'll do it myself the second time. 404s of course don't have the 504 type paper variable thickness liner seals. Will check protrusion if I can (rubber seals have to come out for that usually). Ugh
R

I know how you feel. So much work and everything done so thoroughly. All the more reason not to be disheartened. You've relied on others to do a good job and its always disappointing when work isn't up to standard. Have a word to the senior mechanic at the workshop. But the first thing is to absolutely ascertain where the leak is coming from.

Today I whipped the head off, but not before spot-checking the torque applied to the head bolts by Anderson Precision engines. They were about 50 lbs-ft, which is just a bit light - should have been 54 with the metal clad gasket. With the Reinz or Curty gasket, the torque is 60 lbs-ft.

When using the type of gasket that the long block builder did, the metal surfaces of the gasket is supposed to be coated with boiled linseed oil. He used some sort of Varsol soluble red spray. Maybe that was the issue?? I somehow doubt it.

I could not see any obvious reason for the coolant drip, presuming the head surface is flat. There is no reason it should not be. Liner protrusion of 3 of the 4 cylinders was fairly perceptible but in 404 engines with the rubber seals, they often pop up a bit with the head off and this is a non-adjustable thing (the one protruding less likely was tighter in the block).

The red spray on the piston crowns is gross and to me shows a lack of attention (why not put paper towelling inside to protect them??) and I cleaned it off of course. Super sticky junk.

I'll be eventually using the Reinz or Curty gasket, leaning towards the Reinz, which is Peugeot OE and should seal well (as should the Curty). The Curty says it's pre-treated with stuff to make it adhere to the head and block, and to not use any spray or other treatment. I assume the Reinz is the same. 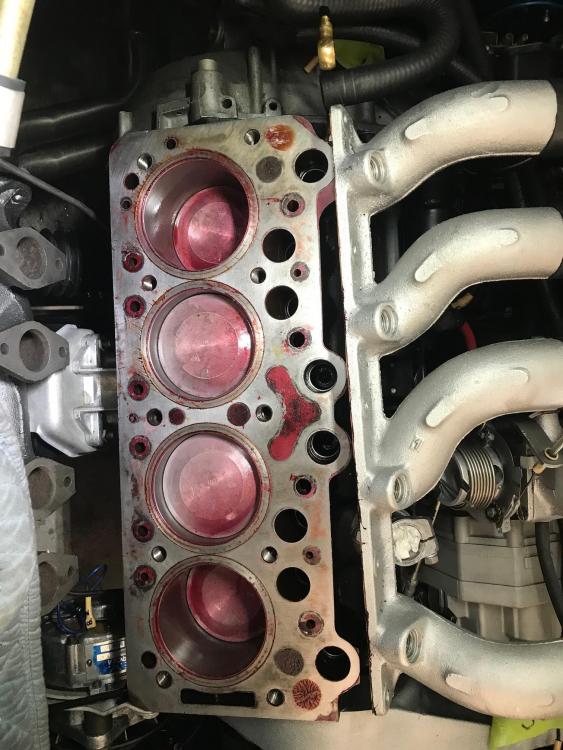 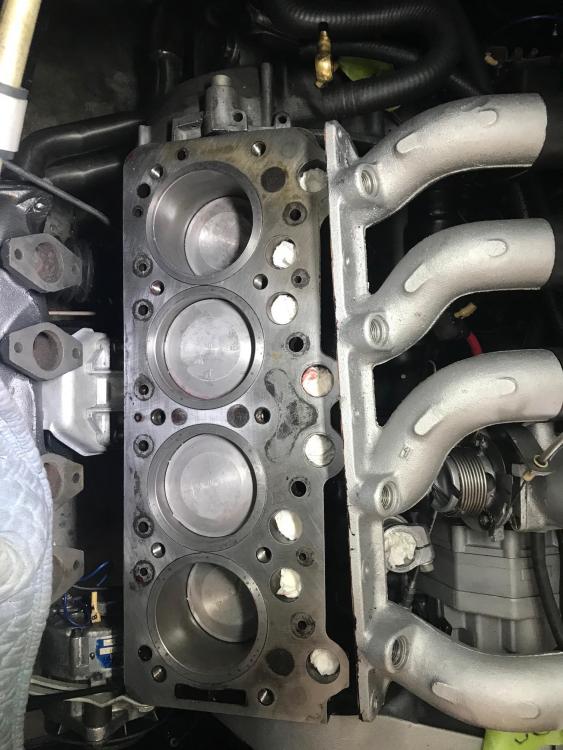 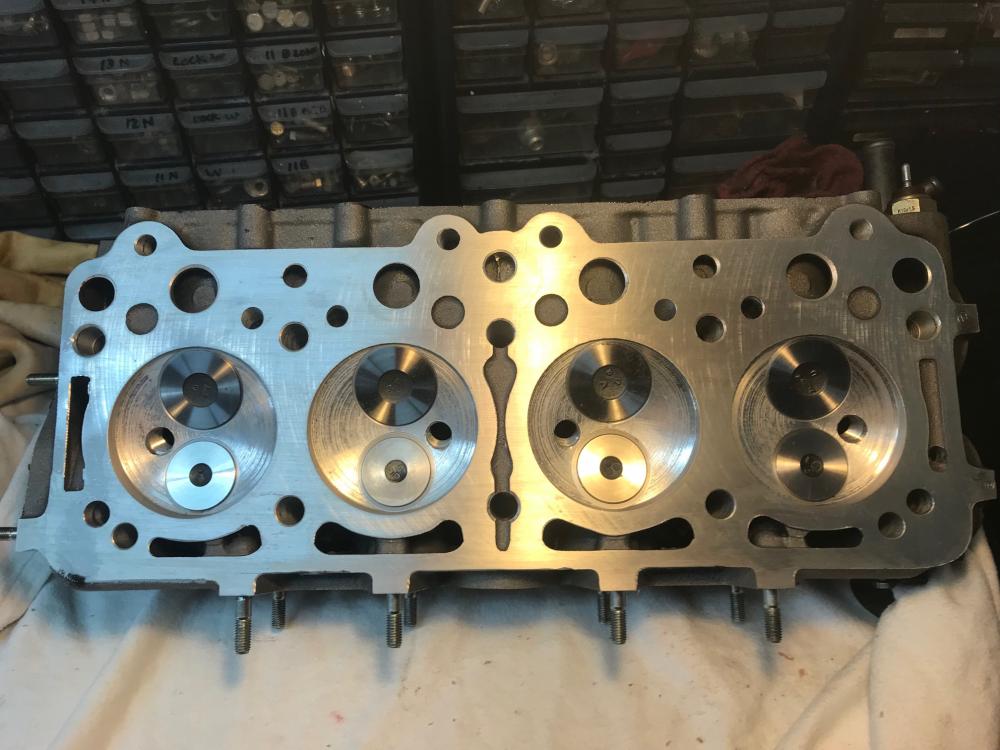 Good progress, Mike. Although I'm by no means an expert, I would've covered up the cylinders/pistons before spraying on that red stuff as well. Doesn't make sense.

Good to see you back Mike . I hope your car can be finished soon.

Not having a machine shop in my garage, I thought I should improvise and check the head for planarity. The best way I could think of doing this was to put the mating surface of the new head up against the same part of the old head. So far as I know, the old head was flat and it certainly did not drip coolant when parked.

Interestingly, the old head rocks diagonally against the new one when the two mating surfaces are together. So either one of both of them is warped. The warp is diagonal, on the end where I noticed the weeping coolant....

Thoughts on this discovery? I expect I'll have to get both checked in an actual machine shop to be sure. If the new head is warped badly for some reason then it may be necessary to have the old one redone - new valve seats, new guides, etc......

The machine shop has contacted me just now and asked me to bring the head(s) down to them for checking, the shop indicated that their records showed that it was not checked for trueness because it was NOS. So we should have a reasonable solution sometime soon.

In the event the NOS head is too warped to rectify (up to 1 mm can come off before compression ratio starts getting too high) then the old head will have to be redone with new guides and seats. I'll bring both down there soon.
R

The heads were always stored on their sides never on the flat.

I took both cylinder heads to the workshop this afternoon and - surprise - the new head is perfectly flat. The old head is slightly crooked though Evan said it's not what he'd call "warped" but could use a skim.

He offered to fine-tune the surface on the new head at no charge to give the best possible chance for a good seal with the Reinz. I think I'll put the head back on after she's back....

It must be a relief to find that the new head is fine. Let's hope all is resolved without much further ado.

It is a relief. Now I'm second guessing the block. The block and crankshaft were both magnafluxed and came out fine so there are no cracks. How likely is it that it's warped? Slim to no chance? Or I could buy a decent mechanic's straightedge to check the block I guess. Might be money well spent?

Yes, I wouldn't have thought that the block would be out of true either but while everything is apart..... I used to use a 2 foot long Stanley level which had a milled edge on each side, although you would expect a proper straightedge to be more accurate. If both surfaces are true, liner protrusion isn't an issue, all bolts and bolt holes are fine it only leaves the gasket and that red stuff?
Last edited: Jun 22, 2021

Bolt holes reminds me, I should get a thread chaser to make sure the threads are all clear and the bottom/s free of rust or crud.
B

m8, that car is so beautiful and the job you are doing on it is off the scale

I've got an entry in our Lotto draw for tomorrow night, first prize is a measly 40 million AUD

if that comes up for me, I'll be slipping you a plain brown envelope so you can finish this off without a care in the world

Mike Tippett said:
Bolt holes reminds me, I should get a thread chaser to make sure the threads are all clear and the bottom/s free of rust or crud.
Click to expand...

Good idea. Muck in a thread can give a false torque reading.

I heard back from the shop today. When they were fine tuning the surface a couple of days ago, a couple of low areas were apparent around where the head was weeping. In the end about 0.38 mm had to be skimmed off to level it all up. So, that is encouraging news.
You must log in or register to reply here.
Share:
Facebook Twitter Reddit Pinterest Tumblr WhatsApp Email Share Link
Top