I finally got around to riveting the aluminium rear plate holder onto the steel mount tonight. The black paint and finish of the centre of the holder was a bit sketchy so I decided to put the "404 COUPE" plate I had made up in France back in 1984 back on. But this time I drilled it through so the BC plate can go on top. I have two more (really!) - one front and one rear. This plate holder is not really suitable for Canadian plates but it's what the car came with. So....

Normally, the plate holder is riveted in 4 spots but it turns out that the rivets have the same spacing as the slots in a BC plate so I only riveted the top two on and the lower two will have thin bolts through the plate, the plate holder and steel mount. Previously when this car had a plate, I drilled holes in the extreme left and right sides, which was kind of gross. 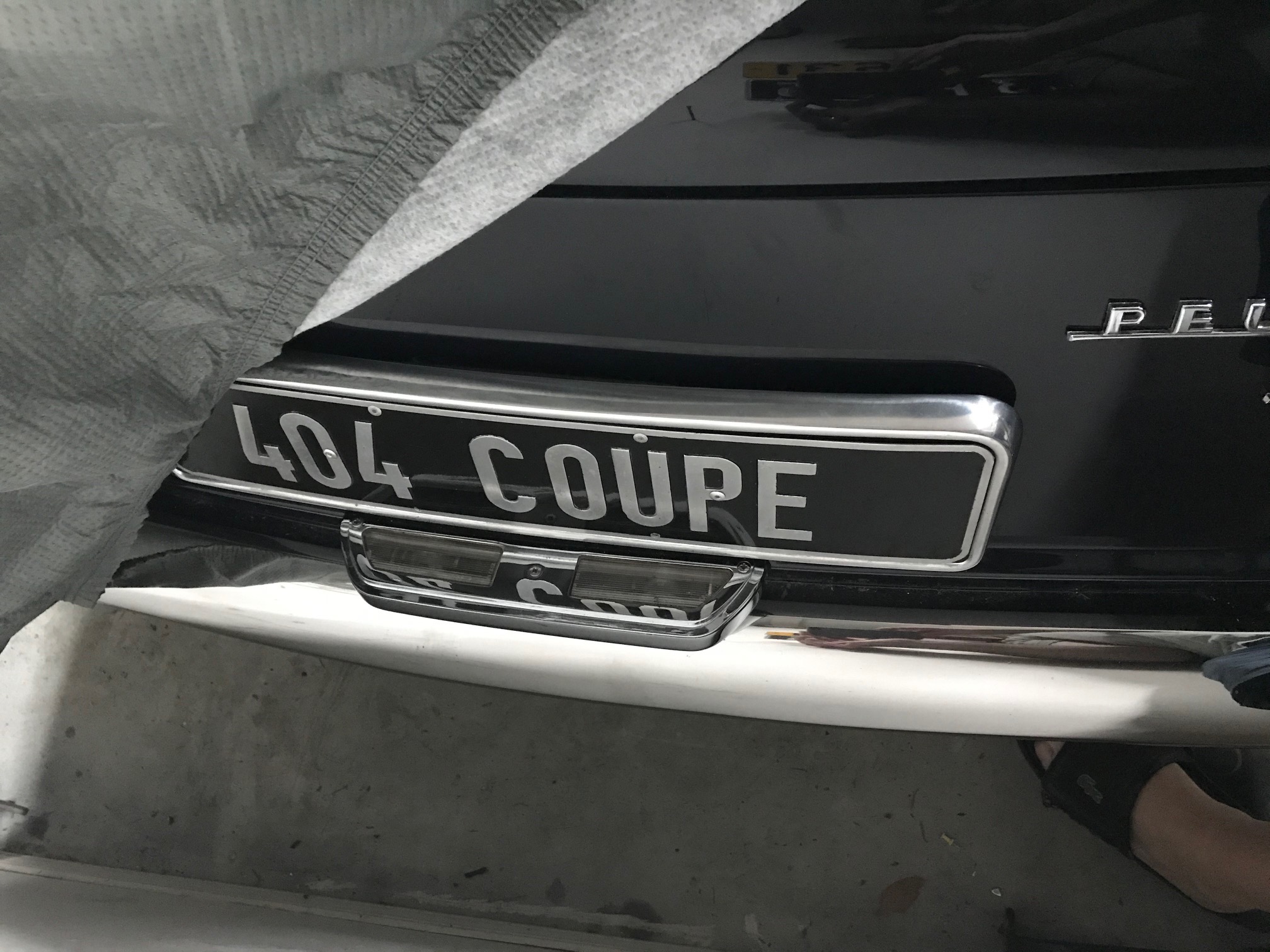 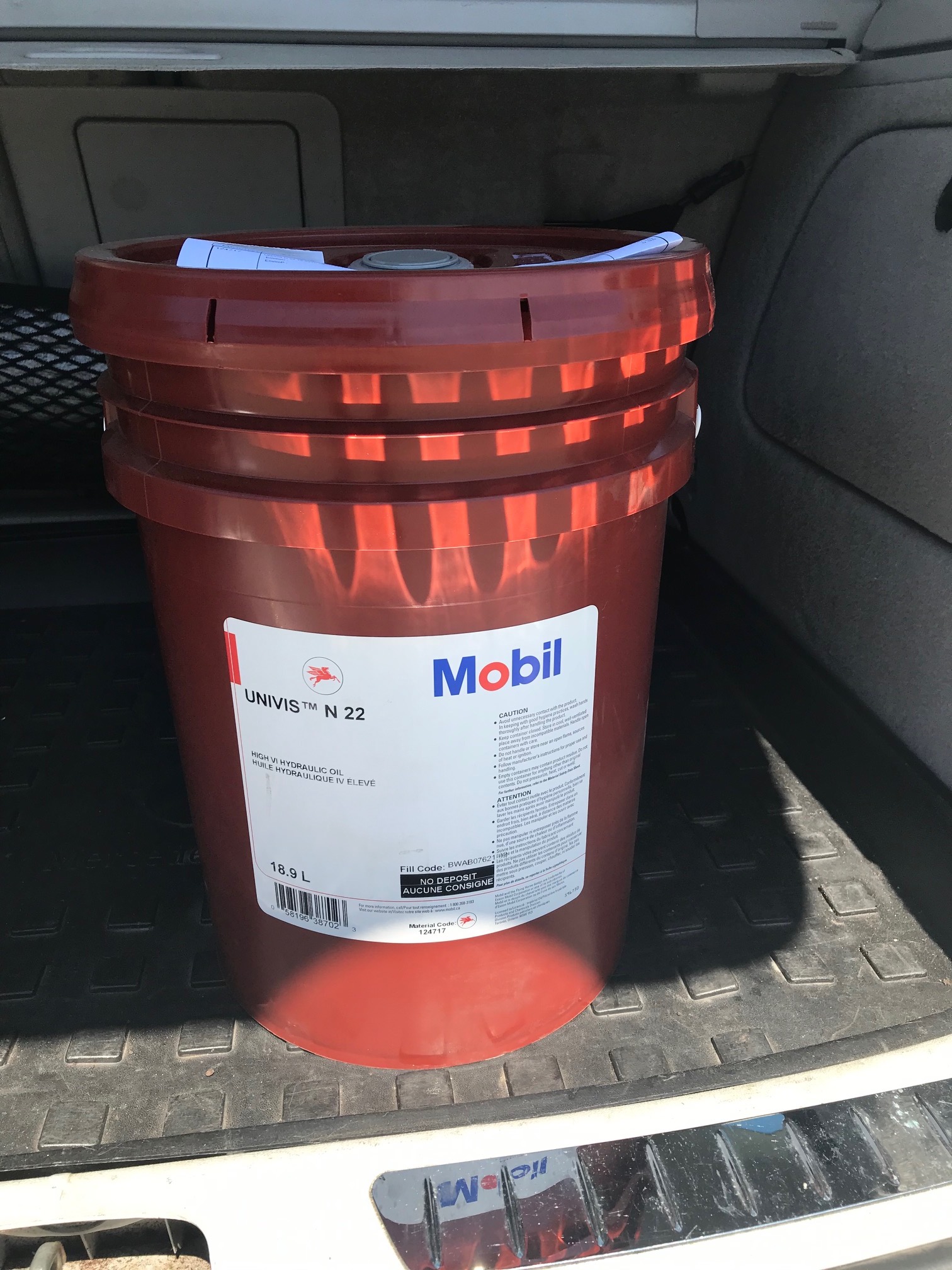 Yes, you sure did! I love your pragmatic approach. You'll never, ever, have to worry about sourcing that stuff again.
Last edited: May 22, 2021

Today was one for doing the first three of five Injection pump settings using the Peugeot-Fenwick factory tool kit.

Step 1: Not a great view, but the tool you see sticking up by Cylinder 4 has a hook on the other end that sticks into the richness lever and locks into a slot on the injection pump body: 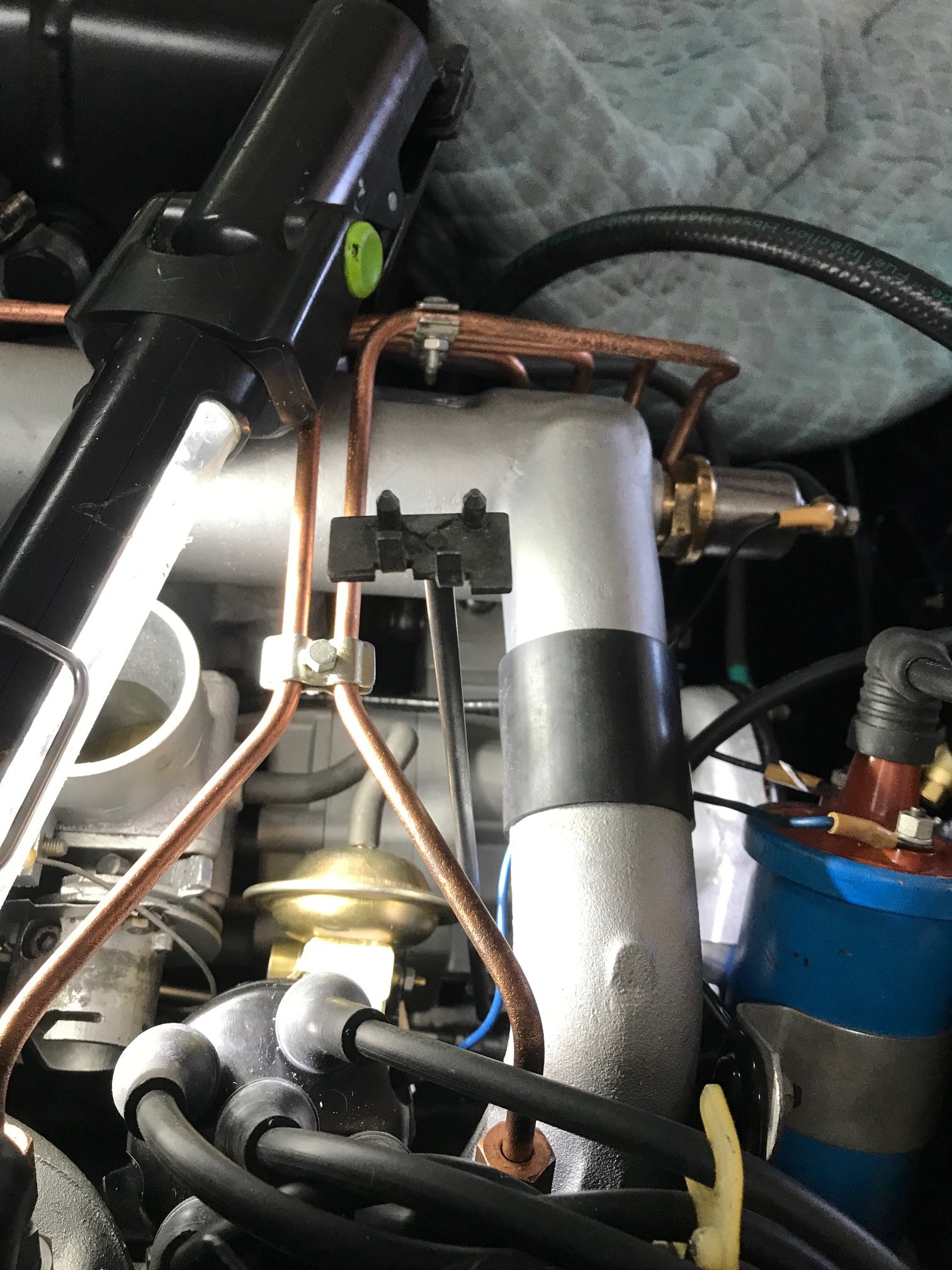 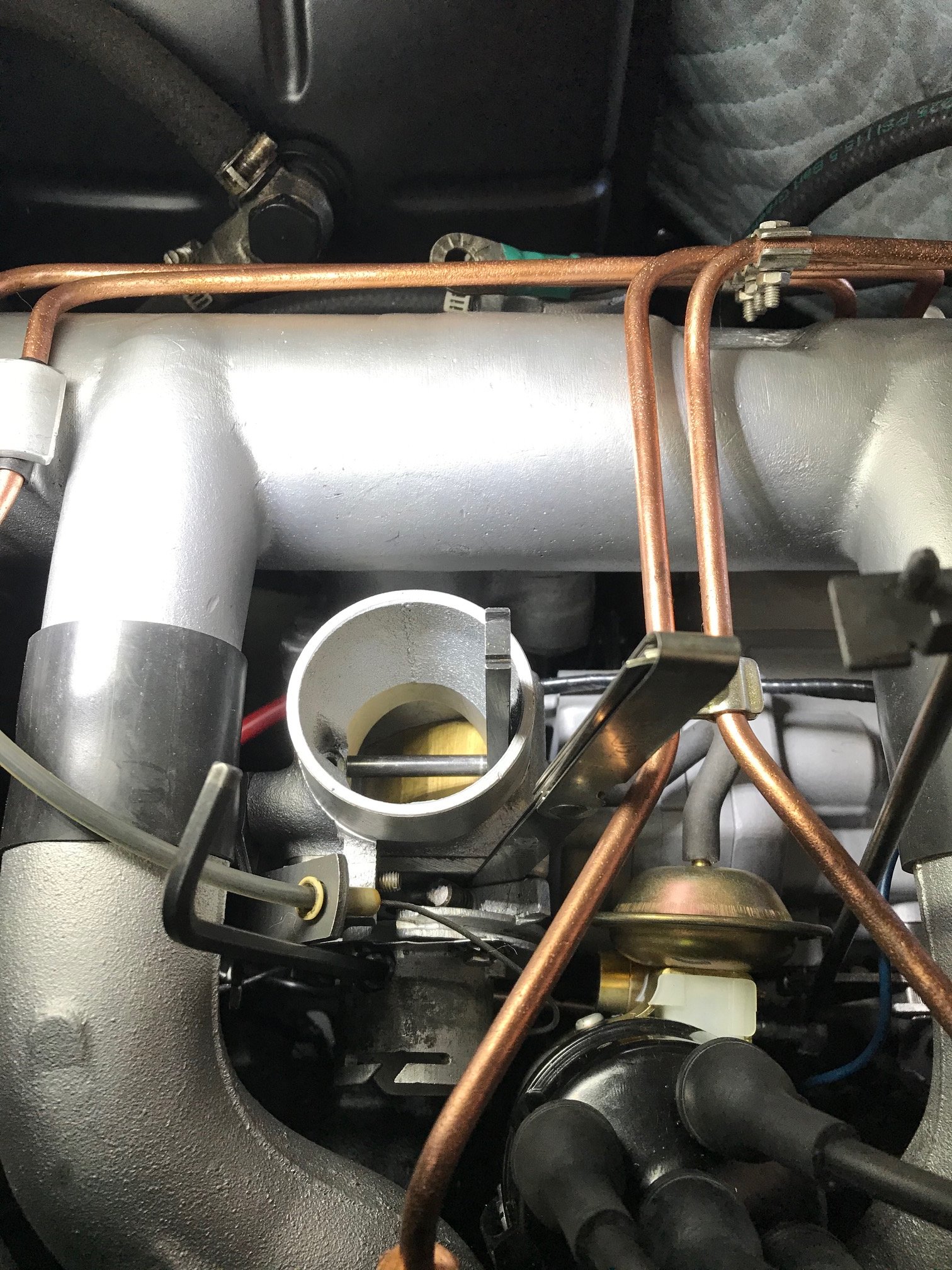 Step 3: In this step - Adjustment I (the precursor to Adjustments II and III of course!) with the injection pump richness lever locked in position and the throttle butterfly also locked in place, the two bolts (with jagged lockwashers) holding the thin metal "sector" plate to the throttle drum are slackened and it's moved until the forward flat mark lines up with the boss on the throttle body, then the bolts are tightened down again. 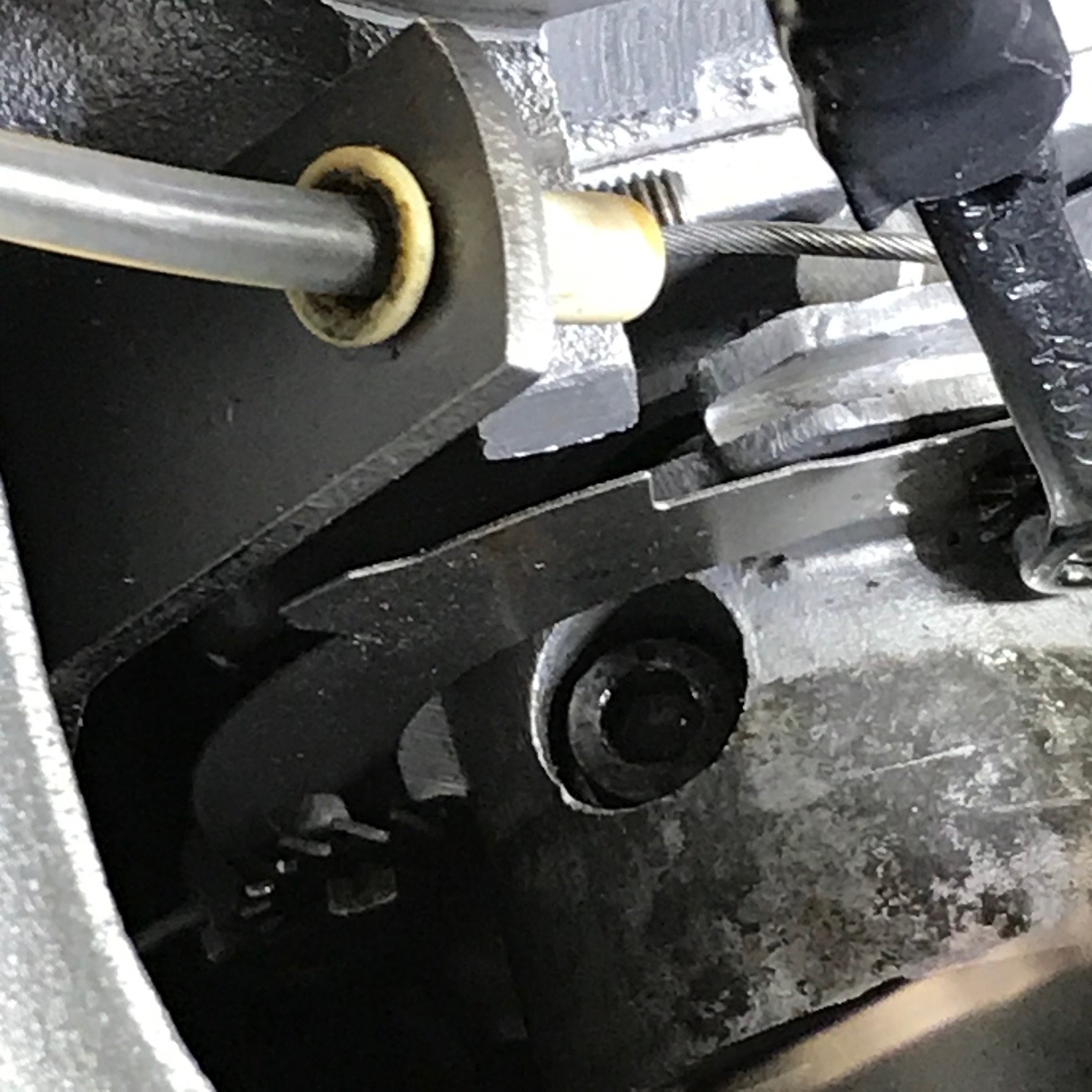 Step 4: Another view of the special tool that locks the injection pump richness lever into a slot on the pump body while the throttle position is set by another tool: 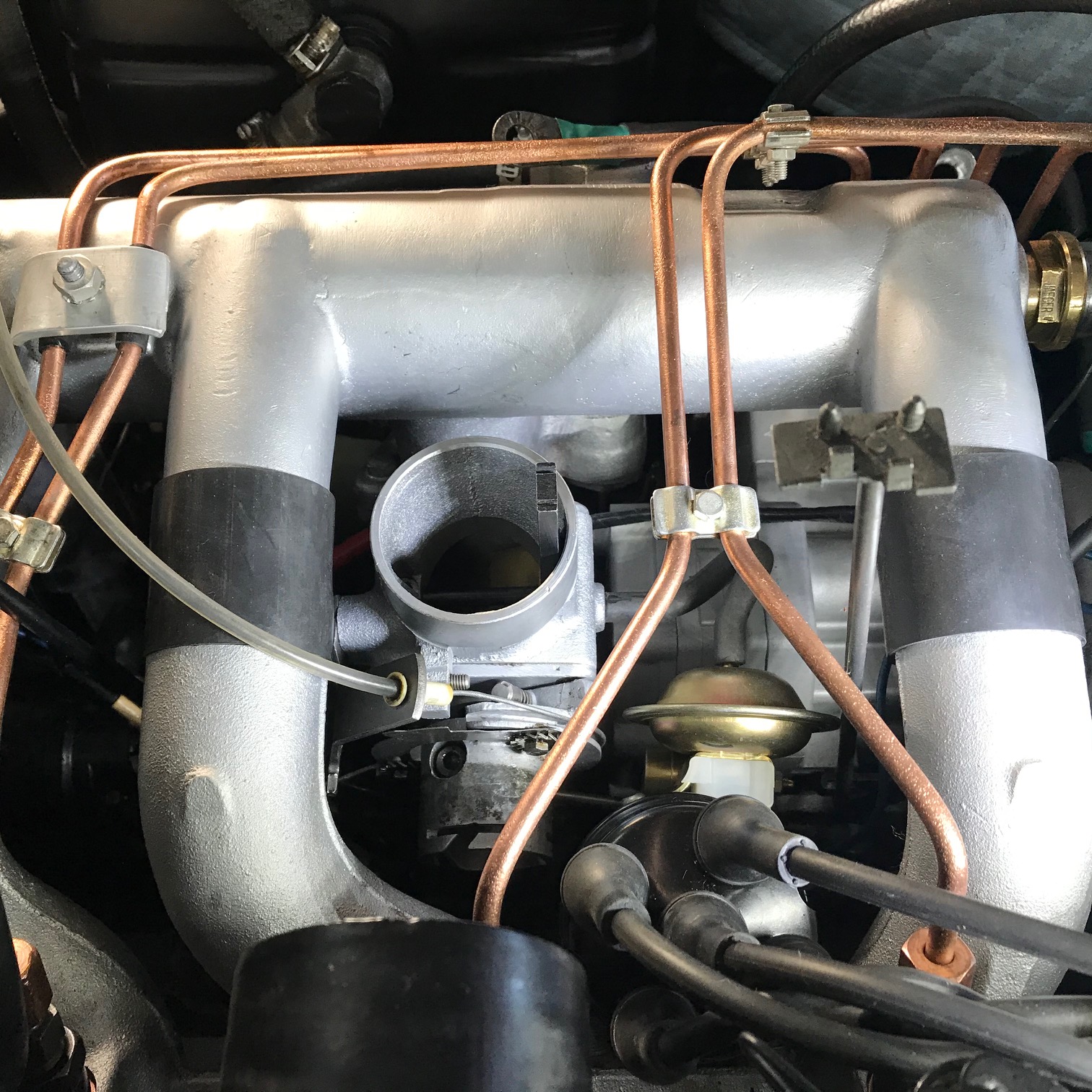 Step 6: Adjustment II: this is the maximum throttle opening (you can see the vertical throttle plate in the photo), and it's set by lining up the notch on the thin metal plate that's bolted to the throttle drum with the jagged lockwasher with the front face of the boss on the throttle body. The adjustment is achieved by rotating the screw whose threading you can see just above the cable. 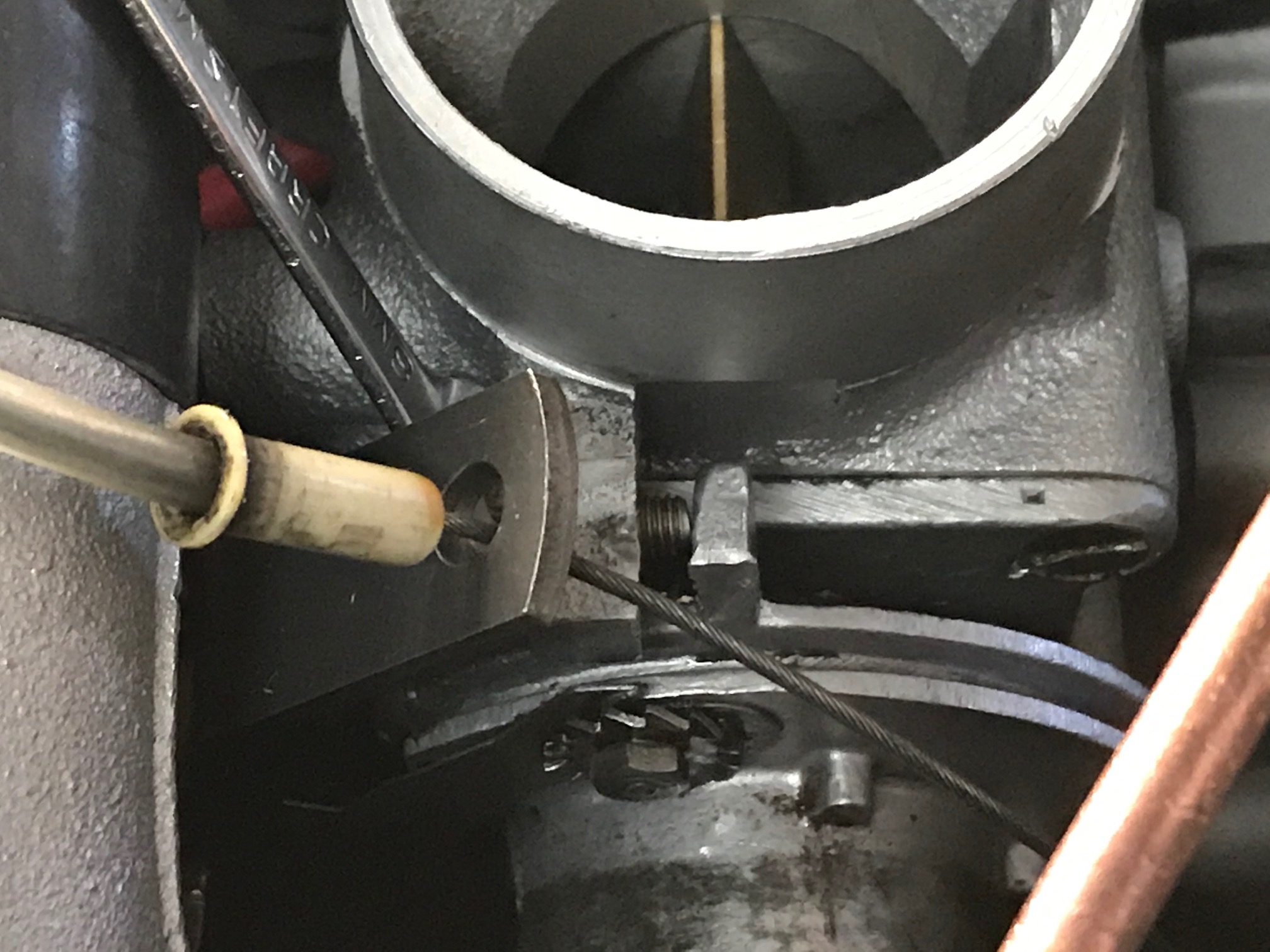 Step 7: Final check (Adjustment III): Minimum throttle opening. Here the higher notch on the thin plate bolted to the throttle drum must line up with the flat boss on the throttle body. Lower centre right of the photo. You adjust it by adjusting the minimum throttle stop screw. Once the engine's running, the adjustment can range between where it is in this photo (12°) and the lower notch to the left (10°). 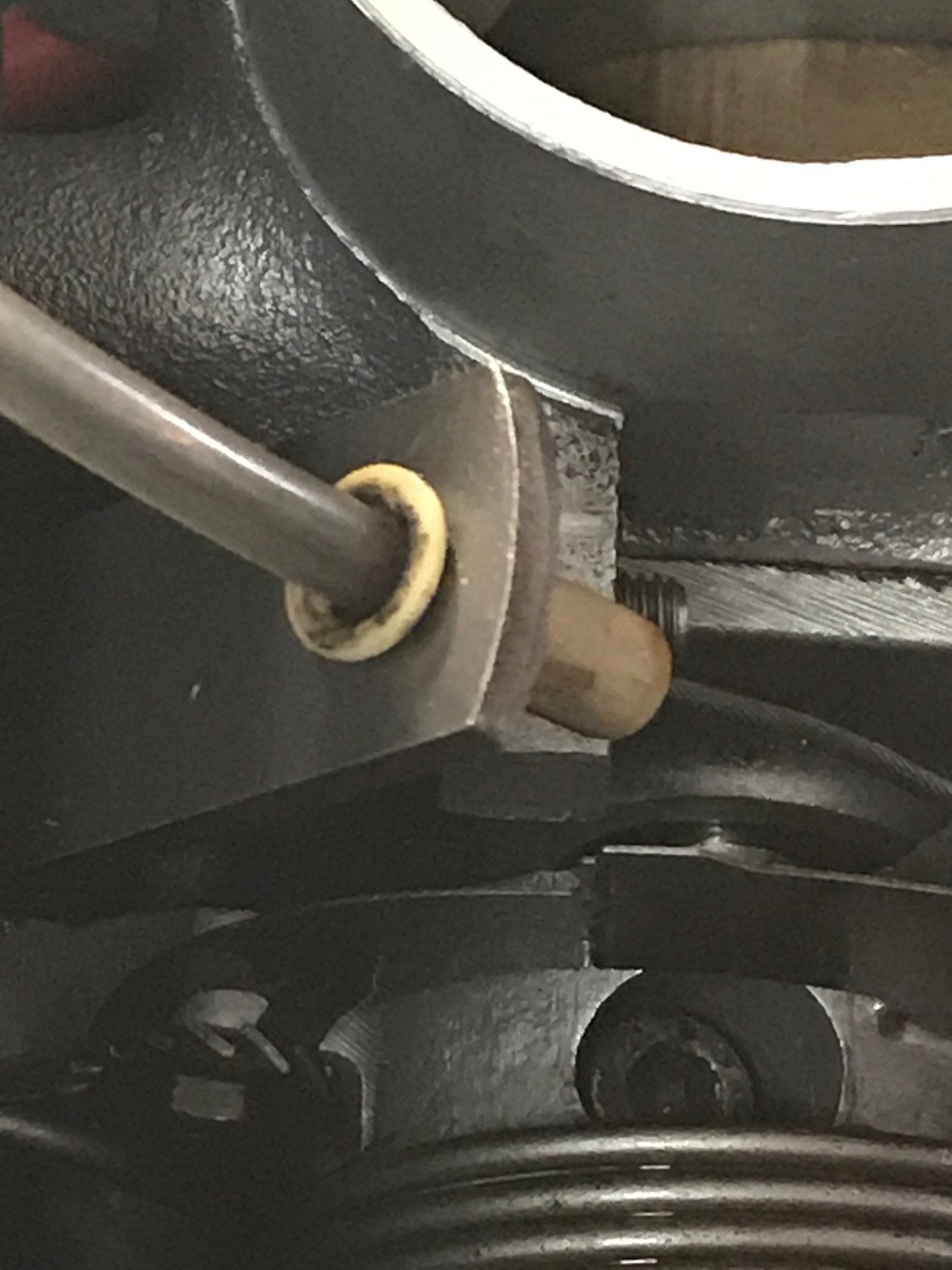 Step 8: put air filter etc back on. Battery cables are ready to be connected: 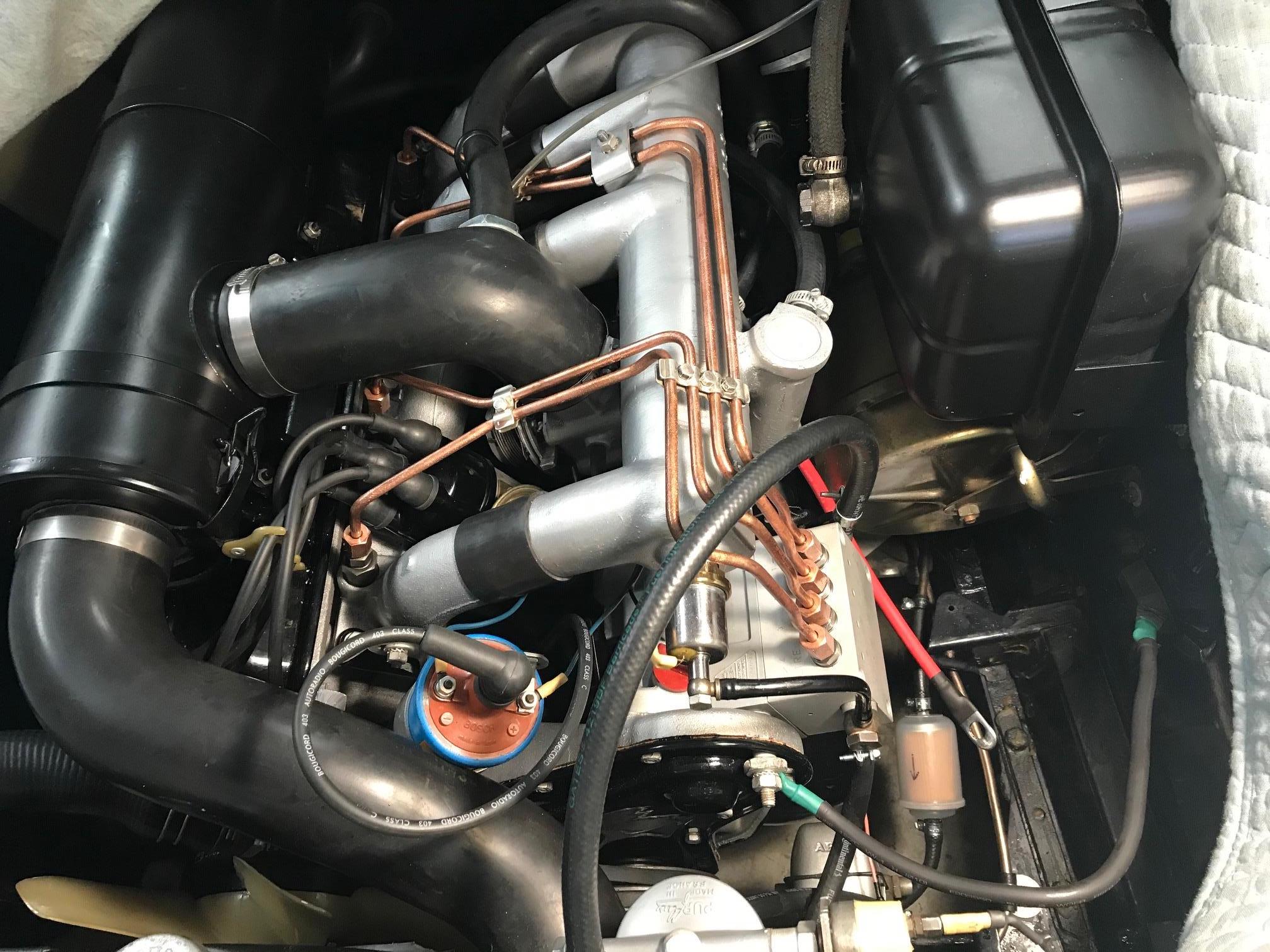 The last two adjustments of the injection system are done with the engine running - basically, the thermostatic richness lever on the intake manifold is set at 60°C by adjusting a screw (more special tools!) and also adjusting the supplementary air valve at the same time.
Last edited: May 23, 2021

Nice touch with the 404 Coupe plates. Missed it earlier.

Factory tools are worth their weight in gold...

This is the stop for the thermostatic enrichment lever. It's a bolt which normally has a single split washer, but in new cars it had an additional 0.5 mm flat washer for the running-in period of 1000 miles. For rebuilt engines too, it is to be installed and then taken out. The funny thing is that of the 4 injection pumps I have, two didn't have this additional washer and two did. The two that didn't were on my car and the one from the 404 KF2 Injection sedan I used to run in the eighties. The two spare pumps were from cars that lived their entire lives running too rich a mixture because whomever serviced them didn't read the workshop manual! 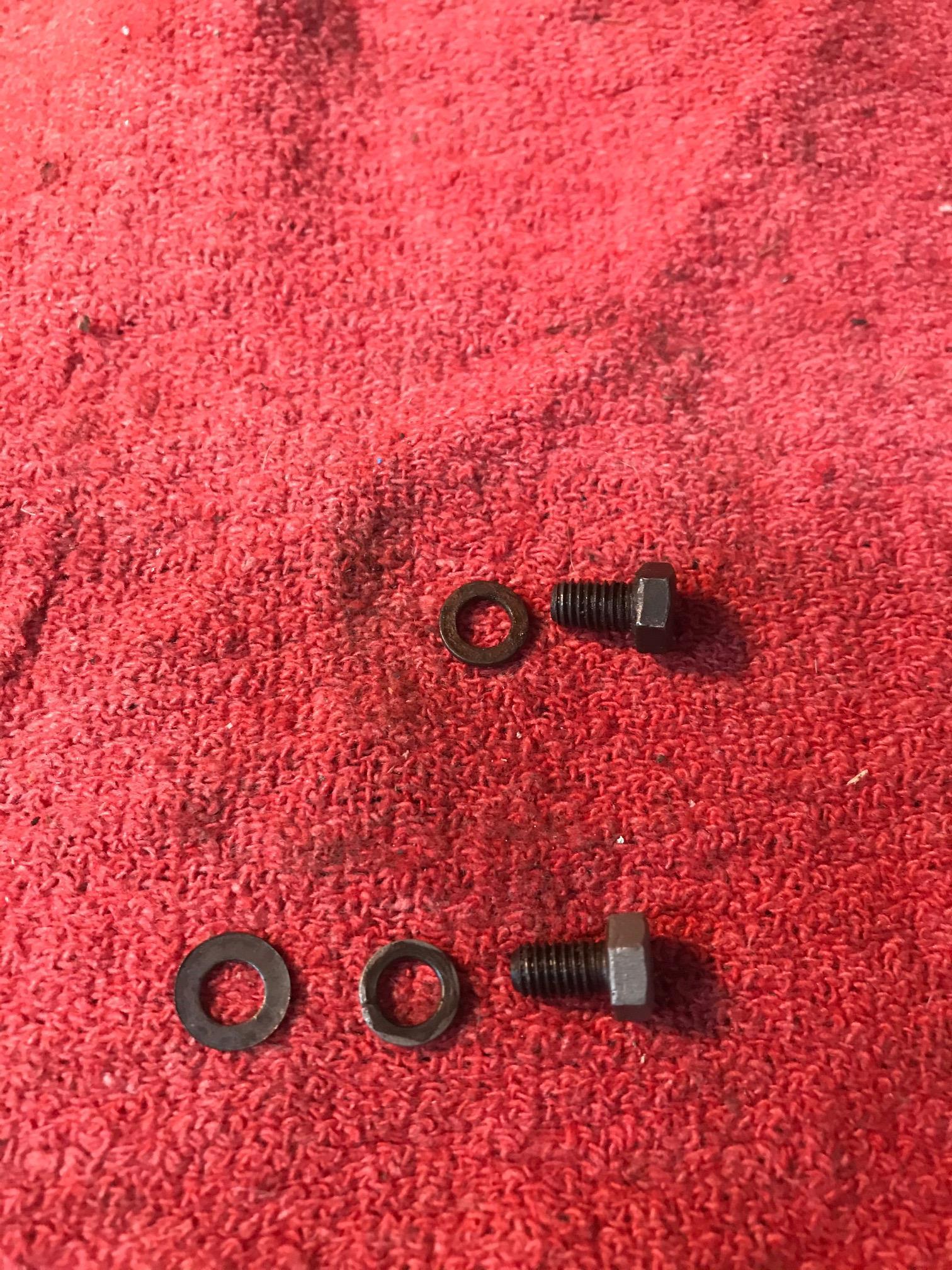 This threaded hole is where the stopping bolt goes. This is a spare injection pump, and I'm holding the richness lever up. 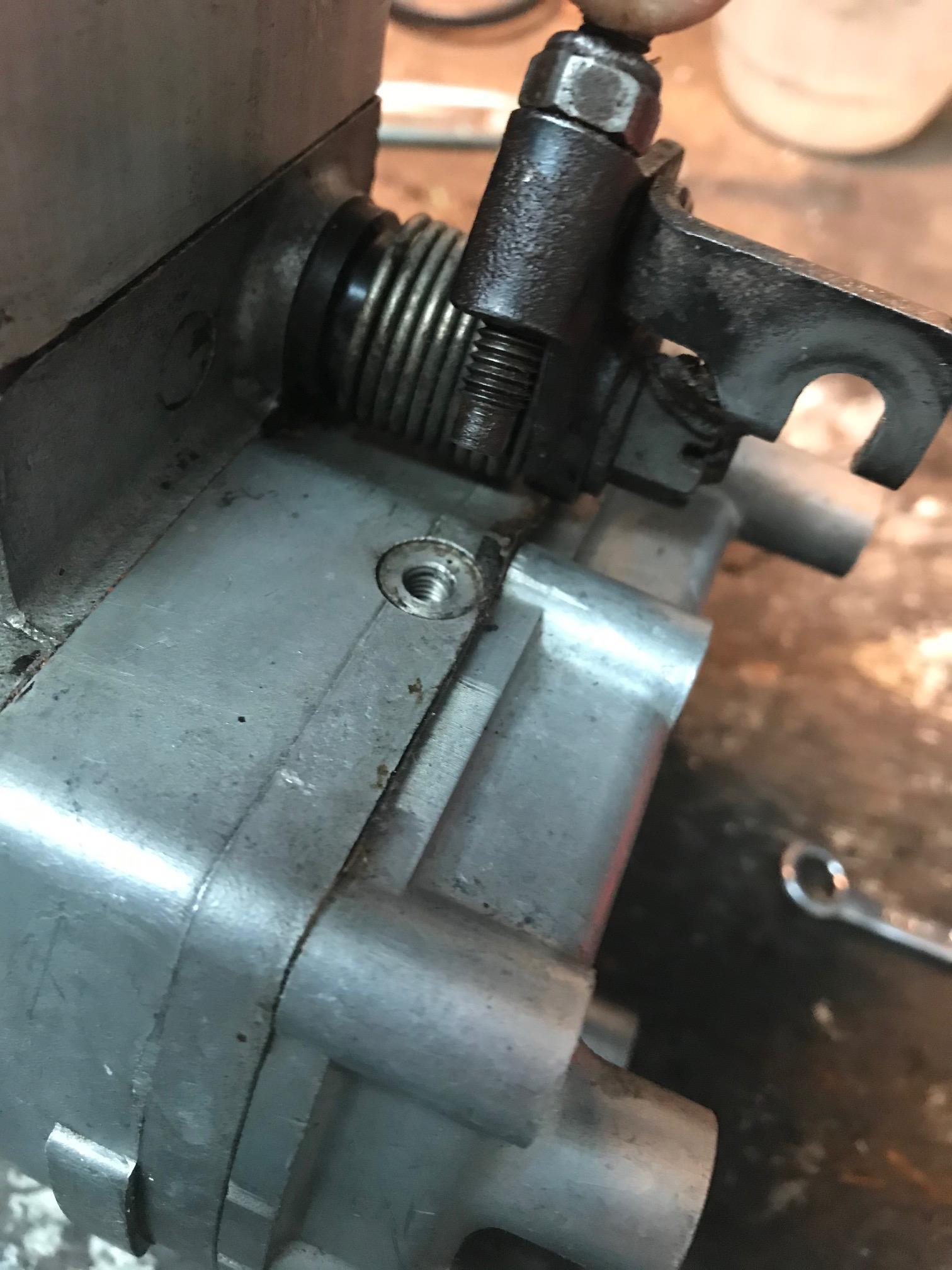 The Peugeot 404 workshop manual says to set the ARC50 purge machine at 31.2 PSI, and the hand pump manufacturer recommends 10 PSI, never more than 20....I suppose that's the issue, haha!

Made this cool bib for the master cylinder to catch spilled fluid, with a rag underneath.

Tuesday I filled as best I could the braking system with fluid. My Rock Auto hand pump vacuum bleeder was not so hot so I ended up getting my wife to pump the pedal (new master cylinder so no problem) and got fluid into most of the system. The pedal's still super soft though so either the Hydrovac is super toasted inside or there is just a lot of additional air in there. These systems are notoriously hard to bleed so I tend to think it just needs a bit more bleeding. The assistance ratio is 7:1 so the slave cylinder on the servo has a huge displacement compared to the master....a very powerful vacuum might do the trick. Will try again, possibly with the engine running, to get the slave cylinder to do its large displacement. The system was totally dry of course.

...and then today these arrived after more than a month from Germany:

Two new lower radiator hoses and a new Calorstat thermostat set at 75°C. So I installed the lower hose, put the thermostat in and filled the coolant. For that I used the long life stuff used in Mercedes, pre-mixed. The system took about 6.5 litres so there's another 1.3 litres to go.

In theory I could attempt a start anytime, but I think I'll double-check the valve clearances and re-check the distributor positioning against Cylinder 4 compression TDC first. That should not take too long. Then I'll put a battery in and check the electrical system.

In the words of Banjo Patterson... well sort of!

There was movement in the garage, for the word had passed around,
that the Coupe from Canada, will soon be on the ground.
It will join the other restored pugs, who are worth thousands of pounds.
AussieFrog members waited to hear the Lion roar,
as they knew it would be a beautiful sound for sure...

The issue with the vacuum brake purger I have is not going to get better; it won't cut the mustard and a friend in California recommended using a MitiVac to generate more pressure. Well....I DO have a Pela pump that I use for oil changes and have used for 15 years.....why didn't I think of that?

So tonight I rigged up a spare vacuum gauge with it and three strokes pegged the vacuum gauge at -15 PSI (-30 in Hg). So 6-7 strokes should do about -32 PSI. Will try this soon!

In other news, I added just over 19 litres of Chevron 94 to its tank today. Will test the fuel circuit soon too.

I need a break from this project. The coolant has been in for a few days and there were some puddles on the ground. Thought it was from a little bleeding I did. Maybe....

...but it's ALSO dripping from the head/block junction. The engine builder used a NOS bi-metallic gasket rather than the Reinz type I asked him to. This is the result. Head has to come off because who knows where else it's leaking. Project is set back a couple of months at least, I think.

Bugger. That is a real set back, Mike, and I feel for you.

Yeah this raises questions as to whether the head is flat. The old engine didn't piss coolant so the block is fine. This is a NOS head and I expect the machine shop checked its mating surface after putting the hardened seats in. But I wonder. The old head is fine I think, but needs....hardened seats to be installed. I've run out of cash for this project this year, so it's going to be pushed into the future, maybe next year.

...or did a head bolt pop or the threading in the block let go.....so many possibilities. Will do an autopsy soon as I don't want coolant in the cylinders (even though it's anti-corrosion).

Yes, getting all coolant out of the cylinders and sump would be a priority. Checking the head surface for flatness would surely be elementary for a machine shop. Let's hope it is something as simple as some detritis in a head bolt hole in the block that was missed.
Last edited: May 31, 2021

Mike,
That is truly a bummer. Was so looking forward to seeing/hearing it running. I share your pain, re money running out. Been to lots of nurseries looking for a money tree, but all the proprietors just laugh.
Peter in on the money with removing the coolant and oil. That is a good idea, especially if there is any coolant in the sump.
Cheers,
Dan
T

Mike Tippett said:
I need a break from this project. The coolant has been in for a few days and there were some puddles on the ground. Thought it was from a little bleeding I did. Maybe....

...but it's ALSO dripping from the head/block junction. The engine builder used a NOS bi-metallic gasket rather than the Reinz type I asked him to. This is the result. Head has to come off because who knows where else it's leaking. Project is set back a couple of months at least, I think.
Click to expand...

Here are a couple of thoughts, Mike, before you get into major surgery: Bimetalic gaskets should be torqued at 11 kg, was this done? Also, some brands do tend to leak and you have to use a cooling system sealant (Wurth works best). This assumes that you don't see steam coming out of the exhaust, in which case the head must come off. So my suggestion is to torque the head bolts, add the sealant to the radiator, and let the car run for 20 minutes or so. Let it cool and run it again; if the leaking problem has not diminished it's head-off time. But if it has, the leaking will likely stop by the time you drive 50 km or so.

Thanks Thanos, I will check that before de-heading
J

I dont think the car has been running yet so this leek looks like a big problem. one loose head bolt would not cause a leek.

Indeed it has not been started!
R

These things happen. You have to stand back, take a break and if it's necessary do things again. It's happened a lot to me. Did a full reco on a 504 motor once with a mate, he put the sleeves in and didn't measure the sleeve protrusion, all ready to start and the water pisses out. You just have to back track. It's easier to do the second time.
You must log in or register to reply here.
Share:
Facebook Twitter Reddit Pinterest Tumblr WhatsApp Email Share Link
Top