Can someone tell me how the engine timing scale on the GS motor (for distributor timing) is attached to the block? It appears from the 1220 parts manual 624 to be two bolts but they are not shown (the original 1015cc motor did not have the scale). The reason I ask is that on our installed motor, we have a bodgy blank aluminium plate rather than the correct scale. A very odd thing considering the attention to detail the main prior owner had. We do have a perfect scale on our spare motor but I am remote to that at present so not able to check the fixing, although even if we can easily swap them over, I am not too keen to rob the spare motor of all the "good bits" making it less and less useful down the track.

Question 1 - would it be possible to swap these over with the motor in situ? The oil dipstick column is in the way, is that easy to detach (it appears to be screwed into place)? Or is this a job to wait for motor out or "most items off" work (like a timing belt replacement)?
Question 2 - would it be feasible to print a scale and then attach it to the blank plate, using the rivets at each end as a guide? Anything sticky would have to be quite (very) sticky to last any time there.

Intend to get the carby and timing tuned professionally but the blank scale will be an obstacle!

Please see photos - the blank one is (sadly) in our car, the other on our spare motor : 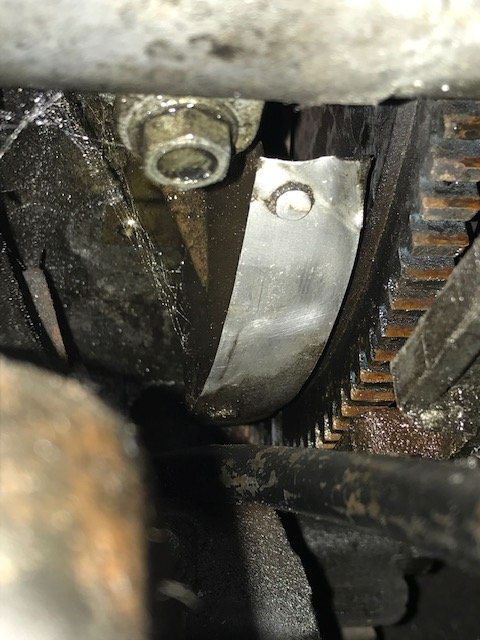 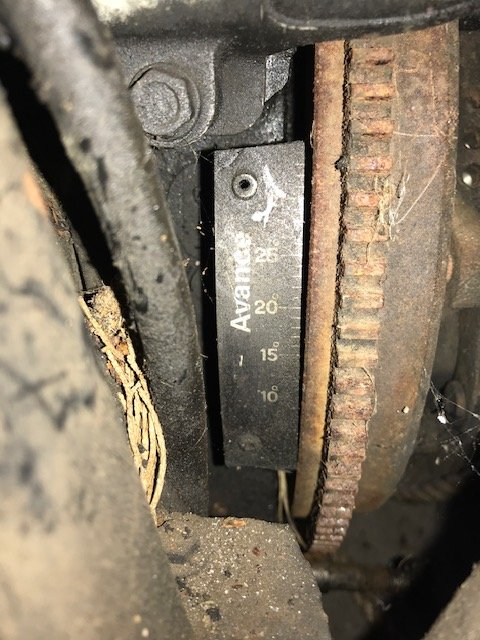 I've been floating around doing this as the rivets on mine are a bit shonky, what is needed is hammer rivets, I've got to refix the engine plate too and these suckers will hold them on. Google hammer rivets and work out the diameter of the holes for ordering.
L

Hi Steven, are you talking about the rivets holding the scale onto the bracket (rivets visible in the photos), or are you saying the bracket itself is riveted onto the engine block (like the engine number plate is riveted on up near the oil filter)?
Last edited: Monday at 8:59 PM

its riveted flat on the block, IF you can reach it all maybe drill the old holders out then tap in the rivets. I don't think you will be able to do all that with the cooling ducts in the way. you'd be better off printing a scale and sticking it to what is there already perhaps. You could order a timing scale and glue that to whats there!
Last edited: Monday at 8:56 PM
L

OK thanks for clarifying even if it's bad news. In light of that yes I agree, I think I need a sticker based solution for now. I will visit the spare motor for a much closer look and measure up the timing scale on that one for reproduction in some form.

they're set to 30 degree if that is correct ? so you could measure off the other motor and paint on the same distance on the bit of aluminium after measuring?
W

Hi Leconte. Here is a photo of the scale on its bracket riveted to the motor. I would say that you will need to remove the dipstick, ducts, distributor to access it adequately, and still difficult, I suspect. I agree with forumnoreason that you could make/buy a scale and glue it in place. TDC is easy to determine, and the scale can be copied. Mine is accesible at the moment so I'm Happy to copy the degree chart on mine on cardboard and send it to you if that helps Cheers Ian 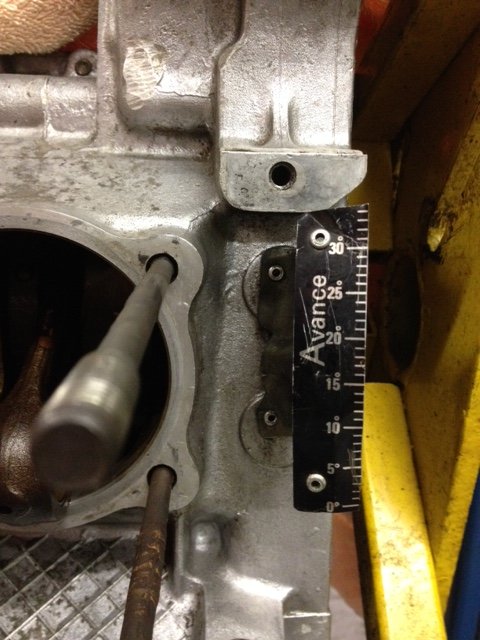 The Haynes manual says to set the static timing of the distributor to the 10 degrees point on this scale (using cylinder 1 rotor position) lining up to a mark on the flywheel. Then rotate the distributor until the points open, then tighten the distributor mounting at this position. Then I suppose with the engine running, a timing light used the old fashioned way should show that position maintained.

All this because the distributor has to come off to install a new set of points, upsetting the timing.
W

Leconte, if your bracket is in place the scale can be pop roveted onto that. The hammer rivets hold the bracket to the block. Ian
L

Great photo Ian, thank you. Shows the rivets on your (beautifully clean) block.

I can get a template off our spare motor later this week but thanks for your kind offer. I might have to approach our fabulous "sticky administrator" for some help! For the purpose of removal and replacing the distributor for new points, I think careful measurement of the one key point (the 10 degrees advance point) onto a piece of masking tape would 'do for now'.

is it smooth at the moment? sorry guys I thought the scale didn't have the bracket duh!
Last edited: Monday at 10:00 PM
L

wheelnut said:
Leconte, if your bracket is in place the scale can be pop roveted onto that. The hammer rivets hold the bracket to the block. Ian
Click to expand...

That may be true Ian, but when I started this thread I was hoping the timing scale would be bolted on, not riveted. I would have to clean up the area there and see if the bracket behind the blank plate is a proper bracket or something bodgied up. However as I said, I am a bit reluctant to devalue our spare motor by robbing bits off it, in case we (or someone else) might press it into service one day, so a sticker may be the best answer.

The motor in the car does have the 5mm 'hole' in the flywheel that you can lock the motor with (and the corresponding hole in the alloy gearbox block apron), but I can't recall right now whether that is TDC on cylinder 1 or maybe the same 10 degrees before? I used it to lock the motor to remove the 42mm fan and starting dog nut recently when replacing the high pressure pump gaiter. If it is 10 degrees before then perhaps I can use that for distributor timing like the 1015 motors....
Last edited: Monday at 10:03 PM
L

forumnoreason said:
is it smooth at the moment?
Click to expand...

Hi Steven, it is not bad but doesn't like idling (stalls at idle revs especially when cold but also when warmish, need to keep revs above about 1200/1500) and doesn't seem to have full power. Think it is running too rich on carby as well, needs a full tuneup from basics and ignition timing has to be right to start with. Plus I feel it needs new points and probably a new set of plugs (NGK BP6ES). It wouldn't start (no firing) at all last week (all of a sudden) but I swapped in a new GT40R coil and now it starts again. Runs well on the road above 3,000 RPM when motor fully warmed up but again a bit sluggish on acceleration.
S

What carby does this car have?
My GS 1220 convertisseur had a weber carby and the carby was reliable and gave no grief. (Unlike the rest of the car, which was a dud. gorgeous, I loved it, but so, so unreliable...)
My sister liked my car so much she bought one too, hers was a 1220 manual with a Solex carby. The car was great, much better than mine, but the Solex carby gave no end of grief - I forget the details, it was back in the 1980s, but the Solex had a weird idle system and would often refuse to idle. It would run fine if you kept the revs up but would die if allowed to return to idle. I think the idle adjustment was an air bleed, and the air jet regularly blocked. Whatever the finer details, cleaning out the idle circuit would restore it, till next time it decided to throw a tantrum.
L

It does have the Weber carby. We took the car to a carby specialist several years ago to enquire about getting a rebuild, and he told us it didn't need one. Probably regret not getting it done and thereby having it properly set up at the time.

Hi Leconte. A couple of things you might look at. If your Weber 30DGS has the idle jet shutoff solenoid fitted, check that the wiring to it is sound and the pin that the solenoid operates is retracting fully and that the motor is not solely relying on the main jet to run. Next thing, I couldn’t tune mine to idle even after I found that problem , and in the end took it to Carburettor Service Co in Burwood and amongst other things they took out the step nosed mixture screw and installed a tapered one. May be black magic, but it did the trick. Idles perfectly and easy to tune the mixture. Cheers. Ian
L

Thanks Wheelnut, very helpful. Ours does have the solenoid, its driven by a wire from the positive side of the coil I think. For me, everything a carby does is black magic, I have never got my head around anything beyond the basics (gives a dose of fuel plus air with the mix varying based on choke and throttle. The mysteries of primary and secondary jets and floats escapes me in spite of repeated head scratching.

regards Leconte
You must log in or register to reply here.