At last after three years Ricciardo wins. What a race. Hamilton and Verstappen took each other out this time.

yep. Good win. Looks like McLaren might be finally getting their act together, but it's a shame that it needed a helping hand from Hamilton & Verstappen. Many will claim Ricciardo won by default or it was a tarnished win, but you can only beat what is in front of you..

CXVingtCinq said:
yep. Good win. Looks like McLaren might be finally getting their act together, but it's a shame that it needed a helping hand from Hamilton & Verstappen. Many will claim Ricciardo won by default or it was a tarnished win, but you can only beat what is in front of you..
Click to expand...

Or, more correctly, what is behind you!

For me, the highlight of the race was Daniels race/win, followed closely by Max and Lewis taking each other out

No shooey for Bottas. Daniel apologises for the oversight. 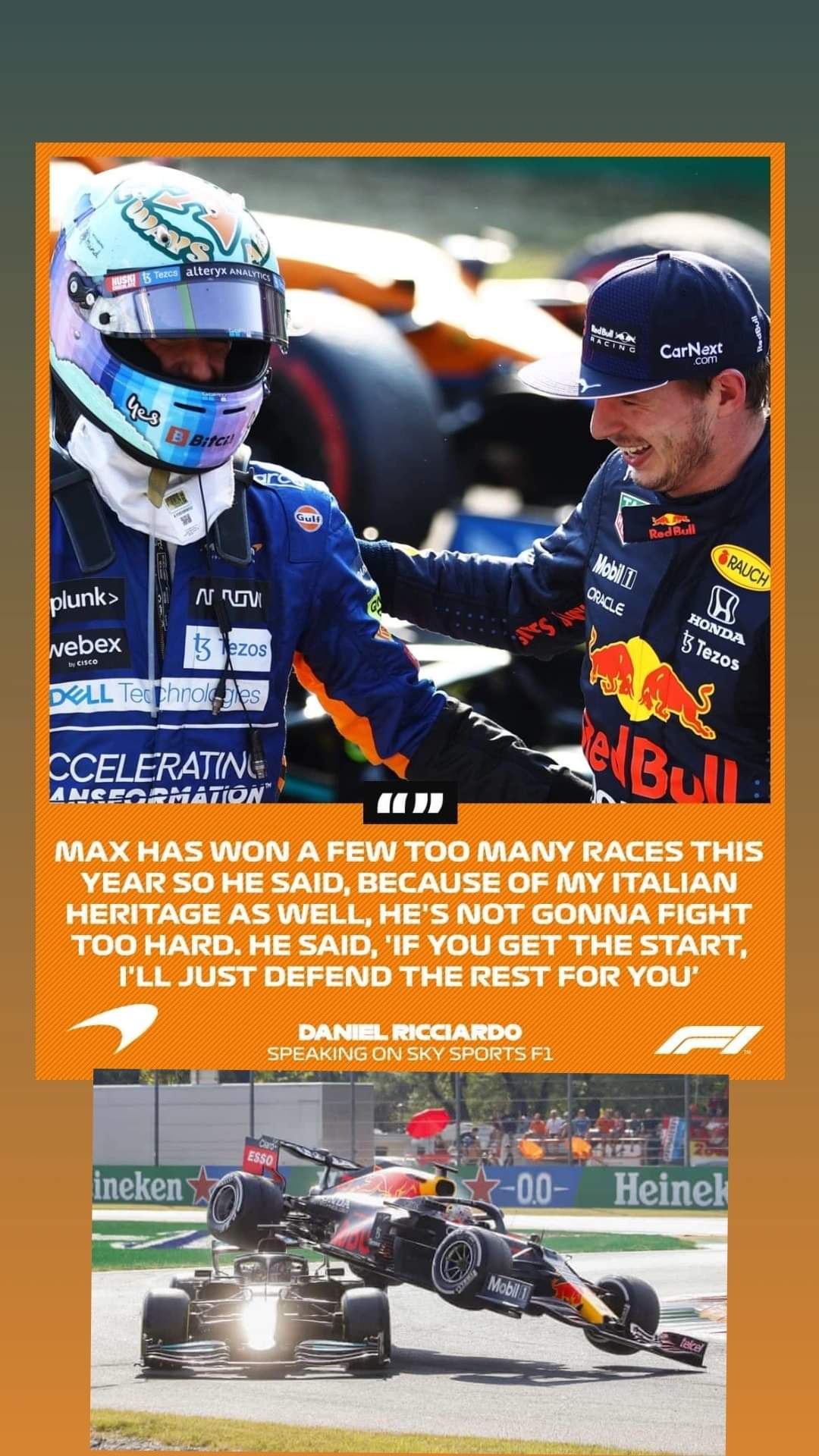 what an arrogant prick that verstappen not to even check to see if Hamilton was alive. ....lost me arsehole.

I’m sure they’re both pricks. But there is no way Verstrapon was oblivious to Lucy trying to reverse the car out from under him, hence knowing he was okay…

Other than Ricciardo and Lando performances, another notable result was by Bottas from 17 (I think it was) to third. He qualified on pole but was relegated to the rear of the pack as a penalty for power unit replacement.
B

dacia4x4 said:
what an arrogant prick that verstappen not to even check to see if Hamilton was alive. ....lost me arsehole.
Click to expand...

agree wholeheartedly, but what really got me was the McLaren pit crew cheering and celebrating before the cars even came to a stop - I'm always revolted by this kind of behavior, the way the pit crews celebrate with high fives and kindergarten clapping when an opponent crashes out is bad sportsmanship at it's best. this time they were happy little chappies at point of contact, but at the time they didn't know if Hamilton had a broken neck...or worse

I was glad to see Verstappen was deemed responsible for the collision. To be overtaking on the outside into a chicane and expecting to be given room in the middle of it was just arrogant. He could have deflected to the left and cut across the chicane as would normally occur in that situation.
I don't know that a 3 place grid penalty at the next race is much of a penalty though.

dacia4x4 said:
what an arrogant prick that verstappen not to even check to see if Hamilton was alive. ....lost me arsehole.
Click to expand...

Lewis lost me years ago when he drove into the rear of Kimi at the pit lane exit in Canada (I think it was). Kimi and another driver had stopped at the red light at exit and Lewis was busy playing games with his steering wheel (my assumption) and saw the problem when it was too late, but still had the presence of mind to steer left into Kimi, who eventually beat Lewis to the title by 1 point that year. If the role had been reversed, I have no doubt Lewis would have been vocal about the deliberate nature of the incident, but Kimi doesn't play games so he did not make any accusations to my knowledge. Just another Schumacher of sorts in my book.

The other great thing about the race. The team camaraderie of the McLaren drivers. Daniel leading halfway through the race, Norris in second radios team to ask Dan to go faster because he had cars on his tail, and Dan drops his lap time by half a second, which I thought was magic. And later on, Norris basically saying he wouldn't be trying to get past Dan, being the best way for both of them to maximize their speed. No whinging!
And in the last lap they both had their fastest laps.
Earlier in the season I seem to remember Norris was chasing Daniel with better tyres and speed, and Dan just got out of the way when requested, no dramas.
Great race.

Late to the party but what a hoot!

FIVEDOOR said:
. Just another Schumacher of sorts in my book.
Click to expand...

Big call! In the dirty player game, those are big shoes to fill.

On a more serious note, twas interesting to see the underside of the car crack when it hit the halo. That gives a good idea of how effective and strong the halo is. 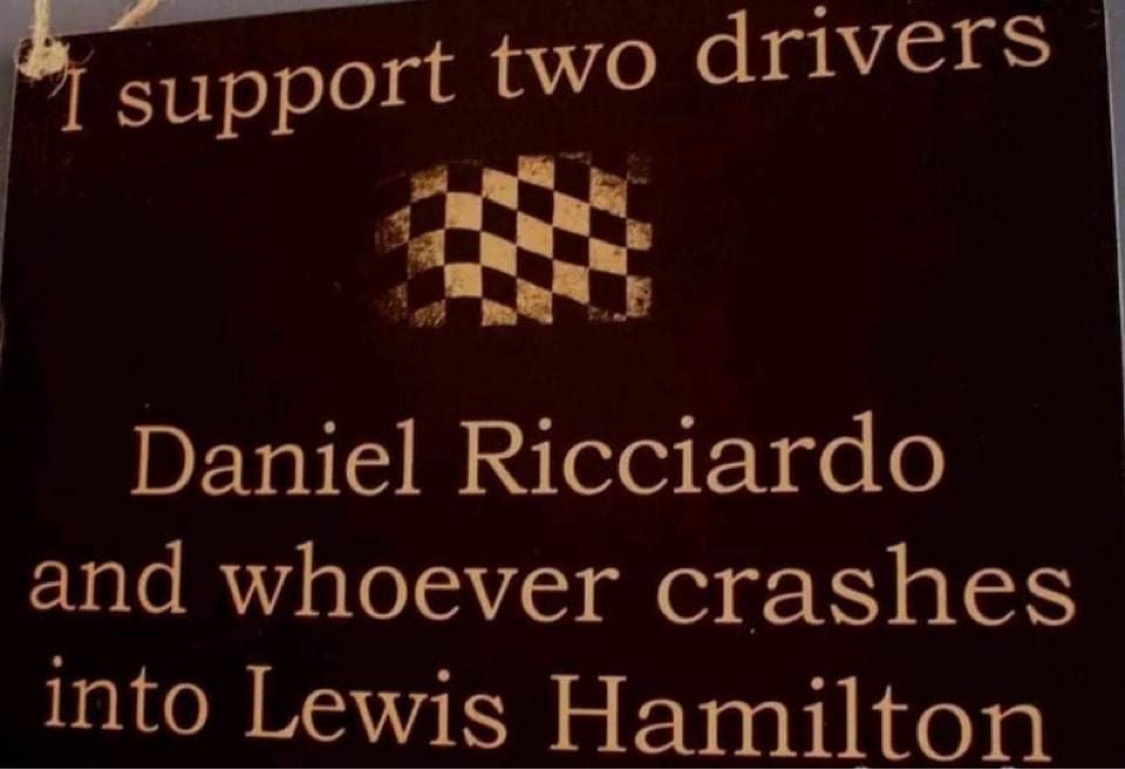