We used to put the early Holdens down because of their deficiencies compared to the 203 but I take a more favorable view of them now. Very important for Australia and people were rightly proud of them. Lex Davison took one to Europe and ran in the Monte. After the first Redex at the function GMH put on for their drivers he is reported to have said what a great engine it had, what a pity it wasn't in a car like the 203.
I was told of a comparison test between the Holden and the 203 but I have never found it.

The 203 was well priced on release and Peugeot must have supplied at an attractive price. Starting at 895 pounds, in a period of rapid inflation and import regulation changes the price was all over the place, it was around 950 pounds in 1951 when the car was 732 pounds in France. This is closer to the French price than later models considering it was carrying around 200 pounds of duty. It wasn't going to be a best seller given you could get a Holden for around the same money or a comparable British car for 150 to 200 pounds less. But it was affordable to the middle class buyers who appreciated its engineering and performance. Market penetration in 1951 would be much the same as selling 15000 cars in todays market.
Real prices altered a lot with inflation and a falling real price due to efficiencies of mass production. The real price of a 203 in 2020 dollars in 1950 was $47500. By 1955 the Australian assembled car was $36940.
The Australian market had a firm idea of what a Peugeot was worth. When the real price increased sales fell, when it returned to a more realistic level sales picked up. In 1956 the 403 was overpriced at $48270 and sales halved. When the price was reduced in 1960 to $36970 sales more than doubled. At the end of 1962 the 404 was released at too high a price, $43170 and sales almost stopped. When the price was reduced to a more realistic $32360 sales began to pick up by 1968.
Chrysler showed with the Simca Aronde a French car with efficient local assembly could be got down to British price levels. The Aronde was priced in France the same as the 203. In 1963 the Adelaide Aronde was selling for 999 pounds, the same as a Morris Major.
Last edited: May 31, 2021
R

A regrettable cost saving decision was the modern, well designed recirculating in cabin heater that had been a feature of Peugeots since the 402 in 1935. The cost to Peugeot would have been small, less than five pounds but as an option it was too expensive, 30 pounds compared to five pounds for a Smiths. This would have supported the Peugeot claim to be a luxury car and been popular with buyers. It set a precedent for Australia where the mildly effective heater core for the 403 was an expensive twenty pounds option. It wasn't until the 403b that the heater was moved back to its proper place inside the car. (Quite a lot of sheet metal work to convert an early 403 to a 403b heater, total dash out but worth the work. )
It would have been better to have the heater than the sunroof. Some of us may enjoy the sunroof very much but it was not popular with Australian buyers as a whole. It was rarely mentioned let alone praised by road testers as a desirable feature or pushed in the advertising. Australian buyers probably remembered the pre-war cars with canvas sections in the middle of the roof that leaked. Although a 203 sunroof was weather tight if the drain holes were kept clear it was common to see water staining on the head linings and some even had the roof caulked shut.
R

The purpose of putting up some material on early Peugeot is this forum is scheduled to be frozen on Australia Day but will remain accessible. As such AF will still have the best material on the early post war Peugeots available on the internet. There may be new sites but I won't be contributing to them. So I'll continue to put up material and bump the page in January so it's reasonably accessible.
I've written before of the exceptional Peugeot commitment to quality and the productions systems put in place to ensure it. A proof is a Simca Aronde had average warranty claims of 7500 francs per car compared to 390 francs for a Peugeot. The English consumer organization Which detailed test of a 403 in 1962 confirms a quality system that could deliver a car fault free and suffer only minor faults in 10,000 miles of hard testing bordering on mechanical abuse. This emphasis on quality production remained until Peugeot became PSA in 1975. It was apparent to users of the 203 and those who repaired them.
G

Russell Hall said:
I wonder why they chose a 403 sept?
Click to expand...

Peugeot confused the power issue of the Sept by changing from net to gross hp in their figures. Even so slightly higher compression and the cross flow head gave a real power boost because the claimed performance figures for the Sept are slightly better than the lighter 203. If the head had been fitted to the 203 it would in theory have out performed the 403. The 403 among the seven finishers in the 1963 East African Safari was a Sept. In France it was 50 pounds sterling cheaper, 600 as against 650. Could have sold here for under 1100 pounds.
G

Both heads were crossflow but the 203 had a long and restrictive connection between carby and ports.

to avoid confusion - i took 'cross-flow' in this instance to mean where the downdraught carb sits above the inlet manifold rather than on the exhaust manifold - apart from that first stage the head arrangement is the same, i.e. what's commonly known as cross flow ...
403 exploits volumetric advantage from cooler mixture falling straight down?
(its the 404-on casting i can't get my head around, if anyone has a diagram)
Last edited: Jun 6, 2021
G

Your definition of cross flow is not one that was shared by Peugeot people at the time. Nor by the writers of The Autocar. I remember it being explained to me by a Peugeot expert sixty years ago. A 403 has the inlet on one side, the fuel mix passes through the head and the exhaust is on the other side. Rather more than just the valve placement.

well, one has to defer to the pioneers of crossflow, doesn't one.
yet, without a caption or dimensions, could a head in section be distinguished? 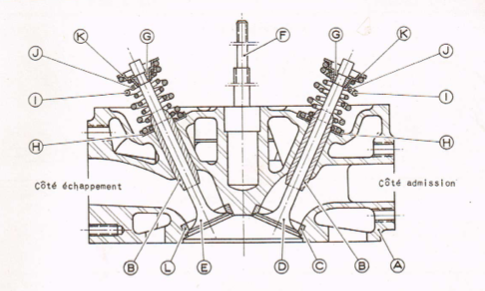 The term crossflow was used for the 403 but not the 203. But people can call them anything they want.

maybe marketing then? ( Look, we moved the carb! ) while the competition was still f-heads and such ...
pedantic of me but fuel mix passes through the head to the inlet on a 203 and the rocker cover on 403, the inlet and exhaust ports placement unchanged.
Last edited: Jun 6, 2021
I

More important to performance is the hemisphrical head
R

Generally cross flow refers to air passing into an inlet manifold on one side of a head and exiting through an exhaust manifold on the other side.

Precisely - and from the 203 on the inlet manifold was mostly within the head, this, as much as the valve placement, does not change.
when I ment competition I meant here, or outside the Continent. Few affordable English cars were so advanced, so I’m surprised by the Autocar missing it before the 403.
G